For those of you who are wondering, next week = Kenyon Review Writers’ Workshop! So this is your last chance to donate to my KRWW fund, if you were thinking about it. If you weren’t, that’s cool, but would you mind sending me all your creativity, like, now? I’m gonna need it.

My homework, courtesy of my teacher / Kenyon Review fiction editor Geeta Kothari, is to read a short list of short stories before we get there. If you care to “get your learning on,” they are:

And yes, I said “guest bloggers.” (!!) For those of you not familiar with the concept, a guest blogger is someone who “pinch hits” when the regular blogger is out of town or otherwise occupied. Like me! So next week you can look forward to at least 3 posts from special friends of mine — including a feisty yet sensitive fellow twenty-something, a fun and inspiring woman/mother/teacher, and someone who once gave a 10-min PowerPoint presentation titled “Living with Kristan Hoffman.”

Regardless of what you think of the Twilight books or movie or author, I think you should be able to appreciate the awesomeness of the soundtrack. Well, if you’re into alt-rock/indie stuff, anyway.

My faves are Rob Pattinson’s two songs, as well as “Eyes On Fire” by Blue Foundation, “Bella’s Lullaby,” “Supermassive Black Hole” by Muse, “Go All the Way” by Perry Farrell, and… okay, you get it, I love them all! But in seriousness, I think the lyrics of “Leave Out All the Rest” (by Linkin Park) have stuck with me the most.

Leave out all the rest

Regardless of what it’s supposed to mean in Twilight (blah blah, Edward’s soul, not wanting to be a monster, blah blah blah) for me it’s about forgiveness.

When I look back at certain people in my life, I don’t want to remember only the times and the ways that they hurt me. Because who does that help? Not me, not them, not anyone. Whatever lessons I needed to learn from those experiences, I did, and forgiving them won’t make that disappear.

Even if we never speak again, I hope we can forgive.

Because I’m sure people are wondering, no, there’s nothing going on in my life right now that sparked this post. In fact I started writing it a while ago, back when I was listening to the Twilight soundtrack non-stop a lot.

That said, occasionally I do still have dreams about the only two people I’ve ever “cut out” of my life. As with all my dreams, they’re usually weird — involving spies, sea monsters, or other such nonsense — but they also include an attempt at reconciliation. Sometimes it works, sometimes it doesn’t. Either way, it’s just a dream.

At the end of the day, I wouldn’t necessarily change what happened, but that doesn’t mean it’s always easy to accept.

Today is Andy’s 25th birthday, which means I spent all day reading My Sister’s Keeper preparing for his surprise dinner this evening and thus had no time to post for real. Instead, enjoy this 33-second clip about what real writers do:

You know what’s really funny? When you think you’ve written a post, and posted it, but then you look, and you really haven’t!

Anyway, I updated my links page (and cleaned out my Google Reader) to reflect some important additions:

(Note: if you are surprised/annoyed that there are at least 6 parts to writing a novel, you obviously have never written one.)

Also, Pseudo is doing another “Hawaii box” giveaway in honor of her 200th post, so head on over and leave a comment! If you’ve never read her stuff, this post is a must. It’s my favorite, although she’s always eloquent or witty (or usually both).

Last but not least, in a truly admirable and unexpected move, my friend Albert (who many of you know in real life) has spent the past year starting up a video production company called Optix Studios. They do event coverage, creative advertising, and the occasional just-for-fun projects. Since he’s not very good at self-promotion (nor am I — but we have made a pact to push each other!) I’m going to link to this sweet music video he made with a few friends.

Originally I was going to write this gushy post about how proud I am of his entreprenuerial spirit, and how I know it’s not easy to go against the norm or what your loved ones want and expect of you, especially when your dreams are so far from guaranteed to come true. But I think the only thing that would do is embarrass him. So I’ll just say that he, like so many of the people I am privileged to know, is bursting with passion and talent, and I know he’s going to succeed. I can’t wait for the day when my friends and I are sitting around a table reflecting on the decades passed, and we can really understand and appreciate all the amazing things we’ve accomplished. 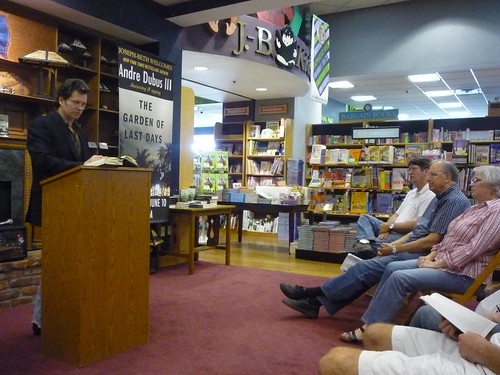 Last night I went to see Andre Dubus III, author of the amazing (but dark) House of Sand and Fog and most recently The Garden of Last Days, and let me tell you, he was fabulous. He addressed people by first name, asked us questions about ourselves, and was quite charming, amusing, and engaging overall. So much so that I ended up purchasing his book even when I told myself I wouldn’t, because quite frankly my bank account is this close to breaking up with me.

(It’s been a staggering couple of months financially, so I really appreciate all of you who have donated to my Kenyon Review Writer’s Workshop fund. Thank you thank you thank you! It’s just 10 days away now and I am totally broke pumped!)

Anyway, back to Andre. He’s a professor up in Boston, so any aspiring writers out there, check that out! The rest of us will have to make do with this paraphrased wisdom:

(He sort of teased me for taking notes…)

Here’s me and Andre and his awesome poster, which is being mailed to him so he can show his wife exactly why he shouldn’t have to wash any dishes: 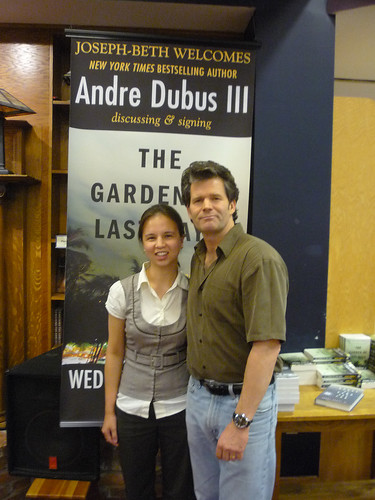