Today was crazy, unexpected, intense, draining, exciting, rushed, and fulfilling. All before noon! 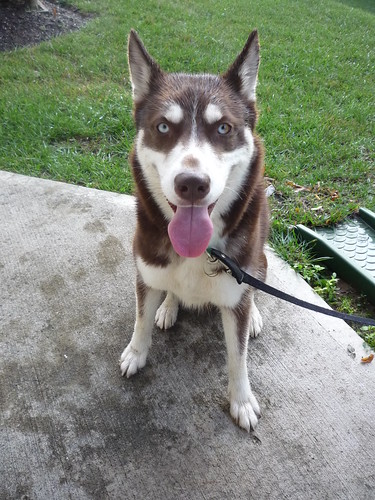 No, this is not a new member of our family. Almost, though!

Every morning before work, I take Riley on a walk. Today, this beautiful and sweet dog came up to us. I didn’t recognize her from the neighborhood, so I was wary at first. (Let’s be honest, she could eat Riley for breakfast.) But she was calm and friendly upon greeting us, and I figured her owner was just around the corner.

Realizing she was lost, I did the only thing I could do, the thing I would want someone who found Riley to do: I brought her home (coaxing her with kibbles), tied her to my patio, and took some pictures. For FOUND posters, of course. I taped a couple up around the neighborhood, asked my neighbor to check on the dog while I was gone, and went to work half an hour late.

(During this process, I also called Andy and my dog-loving coworker Suzie to freak out ask their advice on what to do. Per Suzie’s very good suggestion, I planned to take the dog to the vet this evening to see if she had a microchip. Luckily it didn’t come to that.)

At work, I went on Craigslist to post a FOUND listing. Before I even finished, I noticed a LOST listing with a picture. A picture of a dog that looked just like the one tied up on my patio! So of course I called the number, got the story from the dog’s owner, and quizzed him a bit. What color is the collar? What’s the dog’s gender? What’s the dog’s name? Obviously I didn’t know the answer to the last one, but I intended to find out at lunch.

A work errand allowed me to take an early lunch and swing by my house. Bella, as her name turned out to be, was still lying patiently on my patio, although she was hungry and playful when I went out to see her. Riley was wound up as usual, running and jumping and generally not being helpful.

Bella wasn’t very responsive to her name, so I asked the supposed owner for one more detail: what else was on her collar besides her tags? (Well, besides the ring for her tags. The tags had fallen off, probably during the night while she was wandering around lost in the storm.) He said that he had just bought the collar and it was too big, so he’d had to put a green twist-tie around the extra “tail” to keep it from flapping around. There was in fact a green twist-tie on Bella’s collar, so responsive or not, I knew she was his dog. Because seriously, HOW ELSE could he possibly know about a green twist-tie?!

Long story short (oops too late) I walked Bella and Riley over to rendezvous with Bella’s owner. He was obviously glad to see her. She was relatively aloof, but I’ve heard that huskies are like that. Apparently they are also escape artists and wanderers. GEE, I HADN’T NOTICED. Anyway, they were happily reunited, and I turned down a thank you lunch since I had to get back to work.

(I also showered and changed, because it was freaking hot as heck, and running around with two dogs at the same time was a workout!)

So that was my adventure. Thankfully this one had a happy ending — although I must confess I was a little sad when I got home and there wasn’t an extra puppy in my backyard. :P