Things I forgot about Houston

I’m back home for my friend Mary’s wedding, and I’ve had the good fortune to get to see a few other friends as well. (Ding and Aisha I was expecting, but Julia was a pleasant surprise!) Not to mention time with my family. The front end of the trip has been busy — the good kind! — but after the marital festivities tomorrow, things should calm down. I’m looking forward to writing, watching the Oscars, and more yoga with my mom.

Unrelated: This is super mushy, but it’s also well-written, and almost exactly how I feel after 5 years with Andy.

A while back, I talked about my “social media dilemma.” A lot of you had very insightful things to say, and after thinking them over, as well as reading this post about Facebook pages, I went ahead and took the plunge.

I’m not gonna lie, setting up a page for myself felt a bit… Odd. Narcissistic, I suppose. But I hope y’all know me well enough to know that this isn’t about ego. Bottom line: I just wanted some separation between Personal Facebook and Writing Facebook.

Now friends and family don’t have to read all about the writing stuff unless they want to. And now my writing friends (and hopefully future fans?) won’t be bombarded with 900 pictures of my dog. Everybody wins!

Of course there will be some overlap between the two audiences, and that’s fine. I will do my best not to double-post. And to that point, both Personal FB and Writing FB are managed by yours truly, so the interactions are completely genuine. My Writing FB will not be just about promotion.

(But don’t worry, both groups will hear about nothing else if/when I get published. :P)

Other things the Writing FB will include:

Anyway, just a heads-up about what I did and why. Hope to see you there!

How to train your Dragon

Guess what I got for Valentine’s Day? A Dragon!

(Although I wouldn’t have minded a Night Fury…)

Dragon Dictate for Mac is a speech recognition program. It transcribes whatever I say into whatever program I have open — Microsoft Word, Google Chrome, etc. See, after just a few days of writing full-time, my wrists were killing me! Not for the first time, but given how quickly the flare-up came on, it could easily have become the worst time.

I mentioned this to Andy, and he agreed that I needed to fix my workstation pronto. Now, we could have solved this in a few different ways (ergonomic keyboard, taller chair, laptop stand) but I think Andy purposely chose a solution that would wear my voice out.

Setting up Dragon took about 15 minutes, and right away it was about 95% accurate. Unfortunately, one of the words it couldn’t get right was my name. You see, “Kristin” and “Kristen” were pre-programmed into the software, so overwriting them with my “Kristan” wasn’t easy. (This may have been the first time EVER that I almost wished for a normally spelled name…)

I tried several suggestions that I found in the software’s forums, but none of them worked. For a while I gave up and just started signing my emails as “K.” But I hated the idea of giving in to a computer. Ken Jennings may have lost to Watson, but I was determined to triumph over my Dragon!

Long story short, I think I found a solution. (I created a Command so that “Kristan” would get higher priority over mere Vocabulary words “Kristin”/”Kristen.”) Let’s do a little test:

Looks good to me!

Anyway, my name doesn’t appear in my stories anywhere, so I’ve been using Dragon to dictate my writing for the past week. I actually use it in combination with typing, because corrections are easier to do by hand. But for quickly writing e-mails, or drafting a scene, it flies. In fact, my last two blog posts have been dictated to Dragon as well. And my wrists are a lot happier.

Now, I can’t take my Dragon everywhere. I mean, can you imagine talking to him in the middle of a Panera or a library? So my hands will still be expected to carry some of the load. But my half-sister Trisha called to give me her tips on how to minimize wrist pain, since she and our oldest sister had typing-intensive jobs for years. I think between her advice and my Dragon, my long-term health is in good hands. Pun intended.

(Wednesday has come and gone, so Thursday will have to do.)

1. Last Sunday evening, my book club had the honor of Skyping with author Jamie Ford about his debut novel HOTEL ON THE CORNER OF BITTER AND SWEET. (One of my 2010 faves!) I first met Jamie when he came to Cincinnati for a reading and signing. He was very approachable, and we chatted about his book, being halfies, and writing in general. I’ve kept in touch with him via Twitter and his blog, so I knew he sometimes did these Skype chats with readers, and I felt comfortable asking him to do one with us. And I am SO glad that I did. Even though the dumplings I made turned into a disaster (they wouldn’t cook all the way through! — thank goodness I bought sushi too) my fellow book clubbers pretty much thought I was the bomb dot com for “knowing” an author and getting him to chat with us. Jamie said lots of authors do it, so if you’re in a book club, don’t be afraid to ask!

Sadly I forgot to take photos of the chat, but this is more or less how it went down: 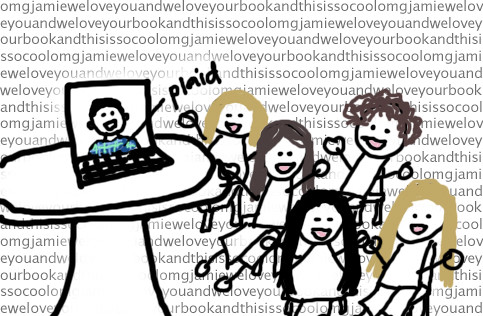 2. Jennifer Tomscha describes the singular pain of trying to make a life out of birthing watermelons. (Oh, just read it. It’s lovely, and it will make sense.)

Of course, figuring out how to live in this world is not only a writer’s affliction. Each person has to wake up every morning and determine how she is going to survive, how to manage the economies of life, how to create room within these economies for what she loves. But for the writer, this task is particularly difficult, in part because the choice to create a life of letters is a choice that has to be made every day, even on the days that don’t seem fruitful.

3. Last but not least, Onnesha Roychoudhuri (try saying that 3 times fast) gives a fascinating look at Amazon’s role in publishing, as well as a little history of the biz before-Amazon.

What happens when an industry concerned with the production of culture is beholden to a company with the sole goal of underselling competitors? Amazon is indisputably the king of books, but the issue remains … “what kind of king they’re going to be.” A vital publishing industry must be able take chances with new authors and with books that don’t have obvious mass-market appeal. When mega-retailers have all the power in the industry, consumers benefit from low prices, but the effect on the future of literature—on what books can be published successfully—is far more in doubt.

Pleasure is the alarm going off at 7, and ignoring it. Pleasure is waking up naturally at 8, when sunlight fills the room, and the dog is curled up warm against my side. Pleasure is having fruit or yogurt or Cheetos for breakfast. Pleasure is taking my time.

Pleasure is walking Riley the entire butterfly shape of our neighborhood. A half hour, a mile. His nose dips into the leftover piles of snow, searching underneath. His feet prance against the pavement. His head turns and his ears cock at the jingling of keys.

Pleasure is another walk at lunch, reading on the sofa or at my desk, and doing chores so that Andy won’t have to when he gets home from work. The blinds are completely drawn back, and sometimes I see deer out the window. Riley barks, and I call him to me. He grumbles but then curls up on the bed, resting his head on my pillow, paws tucked under his chin.

Pleasure is wrapping my arms around Andy while he cooks. Pleasure is smiles and conversation over the dinner table. Pleasure is sitting side-by-side while we watch TV. Pleasure is half-pleading, half-laughing because we can’t get Riley to move into a more comfortable spot on the bed when we’re ready to sleep.

Pleasure is knowing that this was just one day. One day in one week. One week of many. A whole year stretches out before me. A whole lifetime. That’s a whole lot of pleasure.