Every October, a conglomerate of Cincinnati libraries, bookstores, and universities puts on Books by the Banks, a convention for readers and writers to come together and discuss their favorite thing: books.

This year I went with Stephanie and Sarah, and between the 3 of us, we attended 4 different panels. The first was with Chris Bohjalian, who had a smooth patter of stories and jokes. He made me laugh with his anecdotes, then cry (almost) with his poignant reading.

The second panel featured Brock Clarke and Paula McLain, who were more off-the-cuff, and who gamely tried to connect despite their books (and their personalities) seeming quite different. I enjoyed Brock’s sarcasm and self-deprecating humor, as well as Paula’s girlish enthusiasm and passionate ramblings.

Then, for the final panel of the day, Steph and Sarah went to see a group of YA authors we like (discussing whether teen lit is “too dark”) while I went to see Dennis Lehane. 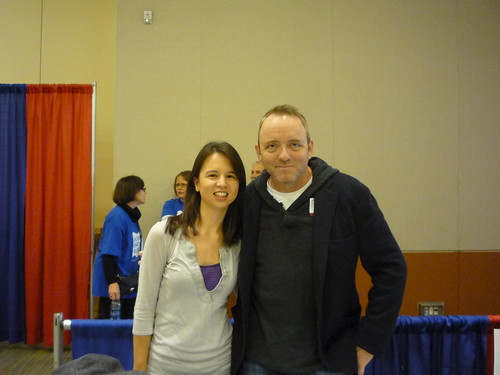 You probably know Dennis’s work, even if you think you don’t. He wrote Mystic River, Shutter Island, and Gone Baby Gone — all critically acclaimed films now. In fairness, I’ve never read his work either, but when I was a senior in college, he came as the English Department’s end-of-year speaker, and I had to miss it (as I did every year) for my dance show. Everyone said he was great, though, so I was determined to see him this time around. And I am so, so glad I did.

Earlier in the day, I had passed Dennis at his booth, signing books, playing Scrabble on his iPhone, and generally looking kind of tired. Assuming that this was part of a grueling promotional tour, I sympathized, but to be honest, I also worried that he might flame out on the panel.

I couldn’t have been more wrong.

For the first few minutes he did say “um” a lot, but once he warmed up, his body and his words filled with Writerliness. You could almost see the change, and you could certainly hear and feel it. He read us part of his new work, which was gritty and clever, and then he took questions from the audience. Below, paraphrased, is some of what he shared with us.

I enjoyed Dennis’s talk so much that I seriously considered asking him if he wanted to have dinner with me (and Andy, who I thought would really like him). Instead I settled for getting him to sign a book and take a picture.

That night I went home feeling rejuvenated, infused with literary energy and learnings. Even writing this recap has ignited a kind of spark in me. All I can say is, if you have the chance to go to this event or anything like it — maybe an author reading at your local bookstore — do it.