On Tuesday night, we reluctantly dropped Riley off for his six-night stay at the Pet Spot and then consoled ourselves with delicious City BBQ. I don’t remember what else we did that night, but I do remember Andy not being able to sleep because he was like a five-year-old on Christmas Eve, and I do remember waking up at 5:30 am (30 min before the alarm was set to go off) because even my unconscious was worried about not being ready to leave at exactly 6:30 am, when ever-punctual, paranoid Andy wanted to go.

The flight there was smooth as can be, and we arrived without problem to Orlando International Airport. The Disney Magical “Express” was not as magical or express as the name would lead you to believe — you have to wait in line to check in to Disney, then wait in line to board the chartered bus — but it was definitely convenient. We stayed at the All-Star Sports resort (anyone who knows Andy is not surprised by that, for a multitude of reasons) and had no problem checking in. Well, except for them saying internet was neither free nor wireless. I was like, Seriously? In the 21st century? At Disney, the most magical place on earth? How can you be magical without free wifi? And the check-in clerk was like, Yes, seriously.

Anyway, with half a day to play, we headed over to Hollywood Studios, the smallest of Disney World’s four parks, but I think my favorite. The highlights were as follows:

Tower of Terror (duh), Aerosmith’s Rock ‘n Rollercoaster, and Midway Mania, the new “4D” Toy Story game. Midway Mania was the only ride on our whole vacation with a longer than 20-min wait (at about 45-60 min) but it was totally awesome and so, SO worth it. 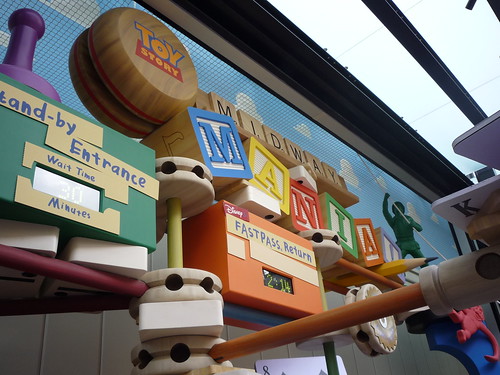 This is Andy demonstrating proper Midway Mania dress and form. You pull the rope back from the blaster to shoot at targets on the screen in front of you, targets made 3D via the very cool yellow classes. Now, you’re not actually shooting anything — it’s all infrared or something — but the accuracy and responsiveness is amazing. And you’re actually on a track going around to five or six different shooting screens/scenarios. Did I mention TOTALLY AWESOME?! 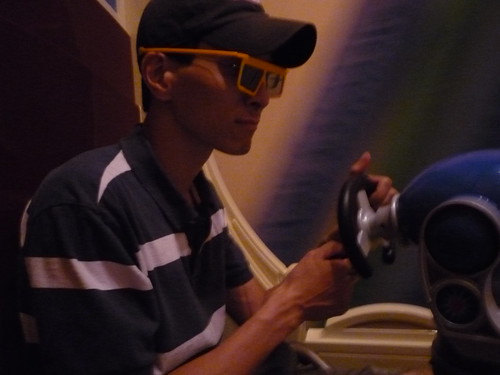 Later we checked out several good exhibits, including One Man’s Dream, about Walt Disney and how he went from cartoonist to inventor, entrepreneur, and corporate genius. After reading more about him, I really believe he had a huge, good heart.

We also ran into WALL-E, and of course I couldn’t resist giving the little guy a kiss. 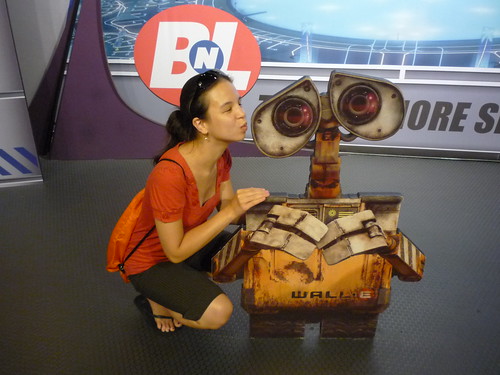 For dinner we went to the Sci-Fi Dine-In Theater, which simulates an old drive-in and plays clips from sci-fi movies and cartoons. Random, but fun. 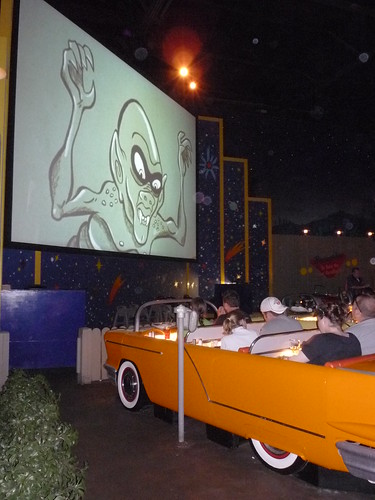 The night ended with Fantasmic, a lights/fireworks/musical spectacular. 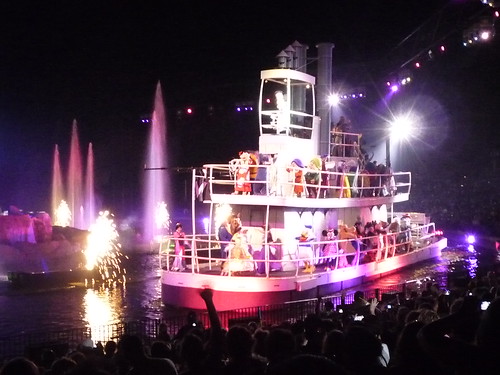 It was a great day and a great start to a great trip. (Did I mention great?!) The whole day I kept experiencing (and bugging Andy with talk about) deja vu, because I’d come before with my parents, but my seven-year-old view had distorted some things. It was fun/ny to see how the pieces of my memory lined up — or didn’t — with reality.