Yesterday, Crossing by Andrew Xia Fukuda became available for purchase. Andrew is another writer and blog-friend I met through the Amazon Breakthrough Novel Awards, and in fact his book is being published via AmazonEncore as a result of his participation in that contest.

Now, I didn’t subject Andrew to an interview like I did Todd, but the Q&A on Crossing‘s Amazon page is what got me interested in his book. I highly recommend checking that out.

Verdict? Crossing took me by surprise. I wanted to read it because of my Chinese heritage, and because of how the Virginia Tech incident affected me, but somehow I wasn’t expecting the book’s emotional depth. Furthermore, the mystery element made it a very compelling read, and certain passages struck me with their literary beauty. Like any book, Crossing won’t be to everyone’s taste, but I certainly enjoyed it.

Of course, I had to laugh when Andrew mentioned (in the Q&A) how most immigrant books feature “clichéd scenes of family meals, flowery mother-daughter relationships, and cathartic returns to the motherland.” Because that’s sort of the book The Good Daughters was. (TGD = my first ever completed novel, currently shelved but slated to be rewritten.) Well, okay, TGD’s mother-daughter relationship wasn’t flowery, and no one went back to the motherland, but it did feature more “typical” or expected elements. (Hence why it needs to be rewritten.)

So in addition to enjoying Crossing as a story, I also appreciated how Andrew stepped away from a lot of the stereotypes. (But not all of them. And hey, some exist for a reason.) Andrew used Chinese culture to enhance Xing’s character, not to define him. Xing could have been a loner for any reason; he just happened to be Chinese. 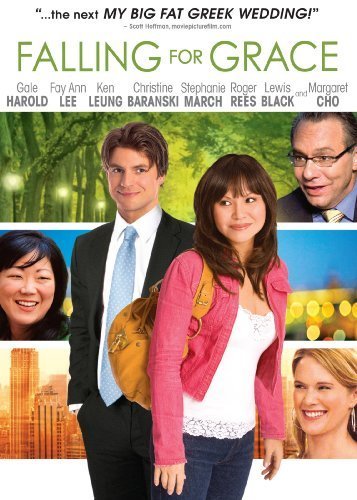 Similarly, actress-writer-director Fay Ann Lee created Falling for Grace, a Chinese-American rom-com. Yes, that’s right: a Chinese-American romantic comedy. Hollywood liked the story but wanted Lee to change the main character to a white or Hispanic woman. Lee refused and put the movie out independently. It’s not 100% polished like the slick things we usually see on-screen, but it’s got a lot of raw truth in it, particularly in the scenes about Grace and her family. In fact, my favorite part (sorry, this is a teeny bit of a spoiler) is when Grace gives her brother some money for culinary school:

Ming: I’ll pay you back, I promise!
Grace: Just cook for me for the rest of my life.
Ming: … I’d rather pay you back.

Did that have to take place between Asian siblings? Of course not. But throughout the movie, their heritage is reflected in their interactions with each other and with their parents, and it makes those relationships feel rich, and real.

Now don’t get me wrong, I love (love LOVE) Amy Tan, and a lot of the more “typical” Asian American fiction that’s out there. (LOVE.) But I think it’s great that some writers and artists are exploring their heritage in other ways. We need to represent the whole spectrum of experiences, you know?

Andrew Xia Fukuda and Fay Ann Lee are doing that, and when I rewrite The Good Daughters, I plan to as well.