On Sunday afternoon, Sarah and I went to see YA author Carrie Ryan speak at our local Joseph-Beth bookstore. She was cute, eloquent, and engaging. No “um”s (maybe because she used to be a lawyer?), just lots of honesty and wit. She didn’t try to spin her story as a fairytale, full of suffering and magic. She said, “This might sound kind of obvious, because it is, but I realized that the one thing I had to do in order to become a writer was… sit down and write.” 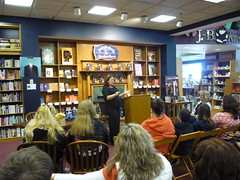 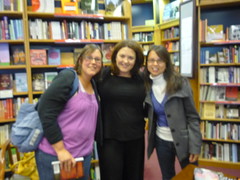 (You get 2 pics because the one of us is blurry, so it has to stay small.)

After we got our books signed, Sarah and I headed over to Joseph-Beth’s café, Brontë, to chit and chat. At some point Sarah said, “You know, Kristan, sometimes I get really frustrated with you. I want to read more of your story — now! But I know I can’t say anything because you’re so self-motivated. My whining and threatening won’t make a difference.”

My first reaction was, PSCHAW. Me? Self-motivated? What was she smoking?

But after I thought about it, I realized she was right. I had been focusing on the “motivated” part, because although I’ve wanted to be an author since I was 9 years old, I’m really good at wasting time, and thus I don’t feel qualified to be called motivated. But Sarah was talking about the “self-” part. She was saying that no one can make me work, no one can push or pull or pressure me into being productive. I either will or I won’t.

(Sarah calls it self-motivated. My mother calls it stubborn.)

I’ve heard variations of those two things before, but that night they finally clicked. Carrie Ryan’s “sit down and write” and Sarah’s “self-motivated.” They bounced around in my brain as I walked my dog, as I showered, as I slept. They looked me in the eye and they said, It’s all up to you. They wouldn’t let me hide anymore.

So. On Monday I said to myself, “From 10 to 11, you will write.” And I did. I wrote 600 words that morning, and another 1700 words that afternoon. 2300 words in one day! The last time I did that, I was sitting at Panera nursing a Five Hour Energy and a pins-and-needles exhaustion, with the name St. Martin’s Press flashing red behind my eyes.

Today I have written over 1000 words again. Tomorrow, who knows. Every time I think I’ve found The Method for me, it breaks. So I’m not holding my breath. I’m just going to ride this spree as long as I can, and be grateful for it. And if/when it ends, I’m going to remind myself that it’s okay. That I will find some other method. That I am self-motivated. That I just have to sit down and write.