A few people have asked me for updates on the “Great Pricing Adventure” that began when Amazon priced my ebook Twenty-Somewhere at the whopping sum of $0. (For the background story, see: “On ‘selling’ like hotcakes.”)

During the 4 days my book was free, about 16,400 copies were downloaded. The title peaked at #9 on the Kindle Free list, and #178 on the Kindle Paid list. For a few hours, it was also featured on the Kindle eBooks homepage next to the Steve Jobs biography, The Paris Wife, and The Hunger Games. That was a trip. 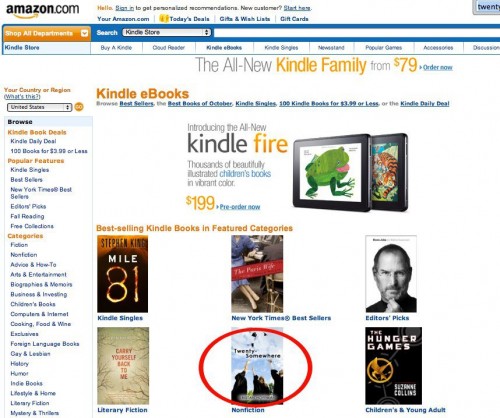 (Yes, it was mistakenly categorized as Nonfiction. I have tried to correct the listings within the author dashboard, but so far I’m not seeing any changes.)

During the 10 days that followed, another 1,000 or so copies were downloaded. Some of those sales were at the regular price of $2.99, while some were at a new price-match of 99 cents. In both cases, I received 70% royalties.

Edited to add: There was also a much higher number of returns during this period. Why anyone would return a free book, I’m not really sure… But some returns were due to people learning about my book from lists of freebies, buying without looking, and then later realizing they were charged either 99 cents or $2.99 for it.

I would say that after that two-week frenzy, sales have dropped off significantly. But they are still higher (by about 10 times) than what they were prior to all this. From what I’ve heard, I would expect sales to continue dropping until they are back to their previous level.

(But I plan to keep my ebook at the sale price of 99 cents through the holiday season, so that may help me ride the wave until next year. Or not. We’ll see.)

Though my earnings will help cover my latest car repairs and upcoming gift shopping, the money is not nearly as important to me as the reader responses that I’ve gotten. There are a few new reviews at both Amazon and GoodReads, and I received several emails that still bring a smile to my face.

It was also interesting to work on my current manuscript while receiving feedback on past writing. I think I have pretty thick skin, but getting several bad ratings/reviews in a row is bound to give anyone pause, and there was one day in particular where it sort of got me down. But I bounced back, and overall I found that responses of any kind motivated me to work harder.

Assuming there are any noteworthy developments, I will continue to post about my experiences with this epublishing experiment. In the meantime, I’m eager to finish and query my next project, something for which I actually have intentions and expectations. (Perhaps too many, haha.)

On a related note, Meghan pointed me to an article about another instance where Amazon price-matched a book to $0. But in this case, the author wasn’t happy. Mainly because the offering that Amazon matched was actually only a 3-chapter preview at Barnes & Noble, not the entire book. Oops.

While I completely sympathize with how frustrating that experience must have been for the author, I have to say that most people I’ve encountered have had more trouble in the other direction: trying to get Amazon to make their book free. For all the things iTunes does poorly with the iBookstore, their price controls are robust and immediate, and I think Amazon could learn a lot from that.

(In all other ways, I think Amazon does it better. But to their credit, the iBookstore does appear to be learning and adapting.)

The unhappy author in that article is supposedly arguing with Amazon, trying to get royalties from all the free downloads. The problem is that many of those downloads would never have been sales. That’s why I certainly don’t feel like I “lost” thousands of dollars from this — in fact, I know that I have gained a number of readers and sales that I never would have had otherwise. Going free is a well-known (though not always well-liked) marketing technique in the world of ebooks.

And related to that, I’ve been wanting to write a blog post about ebook piracy. However, my thoughts never really came together in a way that I felt was blog-able. Thankfully, The Intern posted her thoughts on it, and I felt like she had read my mind. Check out her honest and not too judgmental post, “The Kindle swindlers.”