The other day, I read a very interesting post: “A day down the toilet, why boys don’t read fiction anymore, and the how-to of personhood.” Long name for a long post, but I’m glad I gave it the time. Here’s my TL;DR version:

In one of his books, author John Barnes writes about a teenage boy replacing a toilet to earn some extra cash. Barnes goes into great detail about the steps the boy takes to remove the old toilet and install the new one. The boy works hard, does a very good job, and receives his payment — only to have his money stolen by his alcoholic mother who wants more booze.

Barnes’s editor told him to cut the details of changing out the toilets. She said it was unnecessary and a potential turnoff. Barnes’s instinct told him that that would be a mistake, so he refused. Years later, with the help of reader reactions, he figured out why his instinct was right.

Barnes found that all readers were outraged by the alcoholic mother stealing the boy’s money. But for female readers, the mother’s offense was in betraying her relationship with her son. For male readers, it was in taking away the validation of her son’s hard work.

Males are drawn to “process.” They like to see and understand how things work — steps X, Y, and Z — and that gives them a sense of accomplishment. This translates to stories, too. They respect and define a character based on his/her actions and achievements.

Meanwhile, females are drawn to relationships. They like to see and understand how people interact, and that gives them an emotional investment. They respect and define a character based on how he/she treats the people around him/her.

So for young male readers (i.e., Barnes’s target audience) the details of replacing the toilet were essential. Without them, those readers might not have felt that the teenage boy earned the money, and thus his mother’s betrayal might not have had the intended impact.

(That’s the end of my TL;DR recap. For a more nuanced version, and other interesting observations/conclusions, please do check out the original post.)

All this got me thinking. About popular characters, male and female, and the ones we actually see working vs. the ones whose jobs/deeds we’re only told about. This framework — men want process, women prefer relationships — is broad, but perhaps still useful. 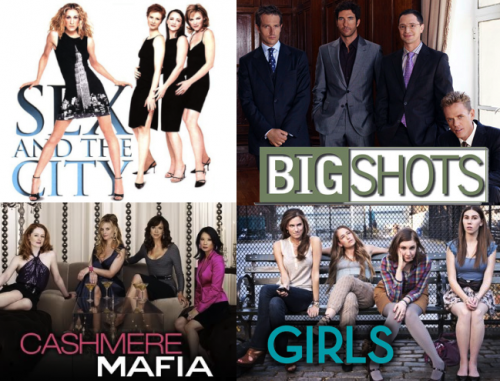 In Sex and the City, we only ever saw Carrie working. (And barely, at that.) Miranda, Samantha, and Charlotte all had jobs, but only (it seems) because it’s a requirement of Character 101. Perhaps that’s part of the reason the SATC fan base was mostly female. Because otherwise it had the right ingredients: the writing was smart, the acting strong, the women sexy. But SATC dealt in relationships — not the currency of choice for most men.

This seems to be corroborated by what happened with Big Shots, the male version of SATC. Premise: four good-looking men try to keep their wits about them in spite of all the gorgeous women parading in and out of their lives. Again, the men had jobs, and high-powered ones at that, but you never really saw them working. (Mostly they were golfing. Or exchanging sexually charged banter with their wives, coworkers, mistresses, etc.) Big Shots’ fan base was as much female as male, if not more so, and the show was canceled within a year.

In Cashmere Mafia, on the other hand, the characters’ careers played a fairly large part in their stories, and I respected that immensely. The show’s ratings were fairly decent, too, but unfortunately it fell victim to the Writers’ Guild Strike.

Now, one of the notes/complaints about HBO’s Girls is that we never see the girls working. Given my new insight, I understand and agree. Yes, the girls are young and still starting out professionally, so there might not be much to show. But in a society where our identities are so often tied to our work (for better or worse) I think it’s essential that we see more of the girls putting their skills to use.

This post is getting TL;DR itself, so I’ll just say that it’s very interesting for me to look back on books that I’ve read, and books that are extremely popular, and see where they fit into this framework.

Call of the Wild, with its mind-numbing details about sledding and lighting fires and staving off frostbite. Harry Potter, with its magic lessons and quidditch matches. The Hunger Games, with Katniss scheming for survival.

Versus, say, The Notebook, or the Joy Luck Club, or My Sister’s Keeper. All popular books, to be sure, but with a certain audience.

I’m not saying process is better than relationships. That comes down to taste. (Personally I’d take Amy Tan over Jack London any day.) Nor am I saying that you can only have one or the other. But I am saying that there might be a clue in all this. A technique to consider if you want your story to appeal to boys and men.

As I continue with editing my manuscript, I’ll definitely be looking at my own work through this lens.