Your cast is beautiful and well-dressed (and sorely lacking in diversity…) but there’s no one left to root for. In Season 2, everyone has become either dumb or irredeemably manipulative (or both), and that just doesn’t interest me.

Scandal, on the other hand, is still kicking ass and taking names. (Literally.) 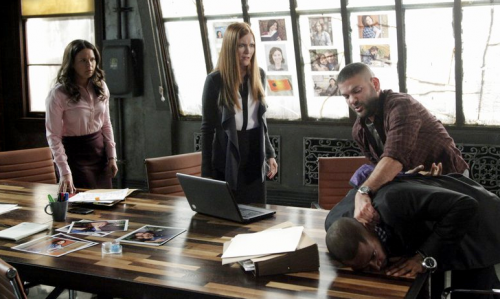 Every time I try to pick a favorite — David’s “the United States of America is in this room” speech, the confrontation with Mellie at the hospital, Harrison blowing off the ditz at the bar, Huck cringing from Olivia’s touch, Cyrus going to see his baby — another great scene comes to mind. It’s a good problem to have.

And then of course there’s the other Shonda show, Grey’s Anatomy. 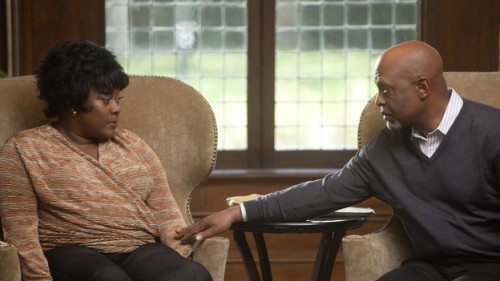 Spoiler level: HIGH. Continue reading at your own risk…

This episode had a few good (even tear-jerking) moments but was mostly “meh” for me.

Let’s start with the good: amusing miscommunication between the interns and their attendings; Dr. Webber’s guilt and sorrow over Adele, as well as his narrating her surgery from the gallery (and the intern taking his hand!); the strangeness/ambiguity of Owen and Cristina getting divorced but obviously still loving one another. These were all very human and real, and as usual the actors did a great job.

Then, the not so good: the biker gang storyline was over-the-top; stuff with Callie and Arizona felt obvious and rushed; Karev and the Princess were douchey and annoying (a particularly large step back for Karev, who’s been maturing so slowly but nicely over the show’s course); and finally, the writers conveniently “forgot” that Richard didn’t just ditch Adele in a home, SHE TOLD HIM TO, AND THEN STARTED SEEING SOMEONE ELSE ROMANTICALLY. Ugh. She doesn’t need to be a saint — nor he a devil — for us to feel compassion for her, so don’t retroactively try to paint them as such.

Related to that, there was a small thing that I wouldn’t say I “hated,” but it definitely niggled at me: Meredith asking Derek never to put her in a home.

Here’s the thing: In the show, Meredith put her mother in a home, and it was fine. Hard, but fine. They took good care of her mom, care that Meredith could not possibly have provided. So is it pleasant to think about someday losing your marbles or needing more attention than your loving spouse can offer? Of course not. But is it fair to make your loving spouse swear to carry that burden on their own anyway? Um, no.

(Maybe she means for him to hire a live-in nurse to help, or have Future Zola chip in? Fine. It’s not that she HAS to be put in a home someday; it’s that this is way too early to be making promises of any kind about the situation, at least not without some real discussion about logistics and finances.)

Caring for ailing and aging family is such a critical issue facing today’s generations, and everyone’s got to figure out what’s right for them and their family. So basically I’m disappointed that there wasn’t a more nuanced discussion/portrayal of that in the episode. (Shonda projects usually do a good job of this!) Instead the episode seemed to imply that assisted living/nursing homes are bad and that putting your parent or spouse in one makes you a bad person. Not cool, and not true.

But, um, to end on a positive note, Ed Sheeran’s “Kiss Me” was featured, and I adore him and that song. Hope this gets him lots more exposure!

PS: Whoever does the screencaps for ABC’s site really needs to get a better sampling from over the course of each episode. We don’t need or want 10 photos from one irrelevant scene, thanks.