Last night, thanks to a work event that Andy had at the Cincinnati Zoo, I got the very special opportunity to hang out with a cheetah cub. 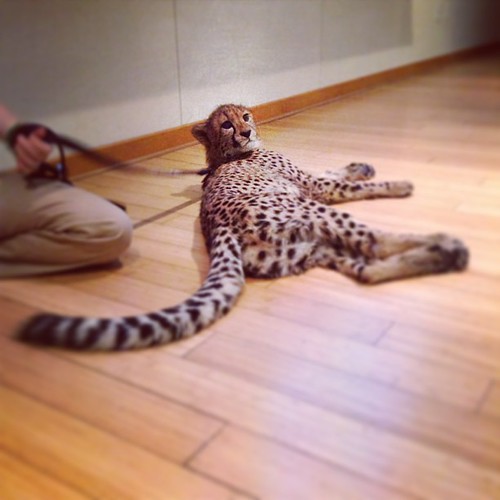 As tall as a Greyhound, with the oversized paws of a Great Dane, Savanna is just 6.5 months old and weighs a deceptively low 38 pounds. (Full grown she could weigh double that.) As part of the zoo’s “Ambassador” program, she has been acclimated to a variety of human sights and sounds so that she can attend functions such as our party that night, or more importantly classrooms, to help teach people about wildlife studies and conservation efforts. Savanna stayed with us for nearly an hour, during which time she calmly sat for pictures, climbed on a table to monitor the room, and even nuzzled her 3 handlers like a house cat. With such affectionate gestures, and some of her baby fuzz still visible, it was hard to remember that she’s a dangerous predator.

As an animal lover, I was super excited to see her so close. (Less than an arm’s length away at times!) I was also impressed with how relaxed and well behaved she was. (More than my own dog would have been in the same situation.) Savanna’s handlers assured us that “her first time did not go this well,” but over the weeks they continued working with her, getting her more and more comfortable with humans and our ways, and now she is a very good ambassador indeed.

When she reached her limit for the night, she strained against her leash in the direction of the nearest exit. Savanna’s handlers took the cue right away and said good night on her behalf. We were all sad to see her go, but it had been an immense pleasure to share her company for any amount of time she was willing to give it. She had put everyone in high spirits for the rest of the evening. 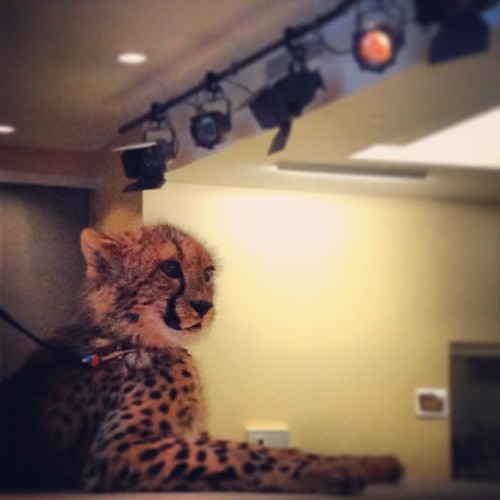 Long after the party ended, as I was going to bed that night, I thought about Savanna’s story. She was one of two cubs born to the zoo, but her brother did not survive. Apparently cheetah mothers will not raise just one cub — because after 18 months, cubs are left to fend for themselves, which would be hard to do without siblings — so Savanna was effectively an orphan. The zoo jumped in, of course, and there happened to be an opening in the Ambassador program. She was also partnered with a puppy of similar age and size to be her adoptive playmate and brother, and the two will be best friends until she matures. (Female cheetahs live alone; but don’t worry, one of the trainers is already eager to adopt the black lab, Max, when Savanna is ready to leave him.) In all, a happy ending for a beautiful creature.

It made me think about humans. About our natural instincts. About when we choose to jump in.

Some might say, “Not everything in life is fair. A cheetah mother won’t even raise her own cub if it’s a single. Does that make her evil or cruel? Of course not. It’s just survival. Those kinds of animal laws are what allow species to thrive. That’s how nature works.”

Others might say, “A cheetah follows instinct — and can only follow instinct — but humans are capable of much more than that. We have reason and compassion, morals and ethics. These things serve to both burden and guide our decisions; they make us who we are.”

Rather than choosing a side, or thinking of these statements as opposing sides at all, I fell asleep feeling glad that both were true.