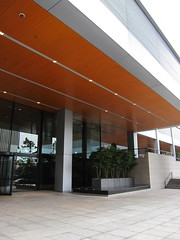 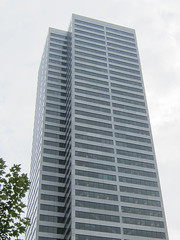 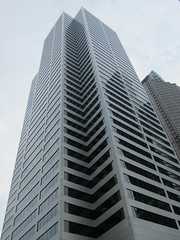 One of the last things I did in Seattle was hunt down this building. It’s not hidden or anything; it sits plainly on the corner of Marion St. and 5th Ave. It’s got a little café in the ground floor. And a newsstand. But I didn’t know any of that when I set out to find it. All knew was what my father had told me over the phone. Vague memories from decades ago.

4th Ave. About 35 stories tall. Cross-hatching support beams that you can see from the outside. I think it’s brown with black windows. And it used to be owned by a bank.

Some of those things are true. Others are not.

The reason my dad wanted me to find this building is that he had been part of the team that designed it, back when he worked for a big architectural firm. He has always done that: pointed out bits of history that are interesting or important to him, thinking they’ll be interesting or important to everyone else too. Growing up I thought it was cool, then lame, then annoying, then endearing. Now that I’m an adult, I think it’s all of those things at once.

Scanning the skyline from the Bainbridge ferry and later the Seattle monorail, I saw a handful of possible candidates, including one that I desperately hoped was not his, because it looked like “some ugly federal building.” But upon closer inspection, none of them had the cross-hatching support beams that my dad swore would confirm his building’s identity. It was like a litmus test, or a birthmark.

Fueled by a sense of daughterly duty, I decided to reserve my last morning in Seattle for tracking down my dad’s building. The strap of my duffel bag dug into my shoulder as I hiked up and down the hills, certain that somehow I could find this thing. Certain that my dad’s role in the project would echo through the years and serve as a homing beacon for me to follow.

That did not happen.

In the end, it took another phone call to my dad — who now said that the building was white or silver, not brown, and that it had retail space at the bottom — with an assist from Google to figure out which building it was. But then, at long last, I found it. Better yet: I liked it.

Though it was built 30 years ago, it still looks modern. There is good attention to detail (at least from what I could see) and those cross-hatching beams are subtle, but nice. After taking it all in, I went inside — and I found myself hoping that I would have to sign in at a security desk, or at least that I would look lost enough for someone to ask me what I was doing there. And then I could say, “Oh, I’m here because my dad’s an architect. He designed this building.”