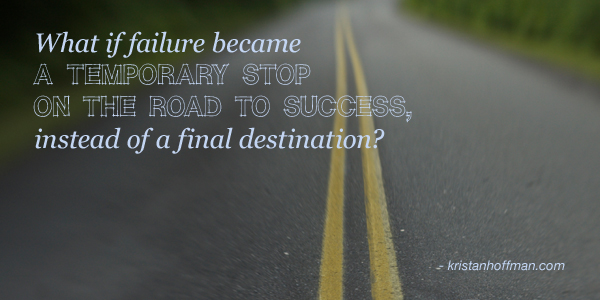 In a recent post, Chuck Wendig encourages writers to “fail without fear.”

We don’t learn a lot through success by itself. That sounds strange, but it’s true. I throw a basketball at a hoop and – swish — first time in? I don’t know what the hell I did. But I get one shot in and nine missed, I start to see how I can do that better. And suddenly, I start making more baskets. We make sense of our efforts through failure.

Failure is a word/concept that I think many of us are afraid of — but what if we just thought of it as a code word for rough drafts and imperfection? What if failure became a temporary stop on the road to success, instead of a final destination?

The other day, I had to get something engraved. (A trophy for Andy’s fantasy football league. Yes, they are that dorky about it.) I ran around town looking for a shop that would do this little one-off job, and finally found a really nice guy who was happy to take care of it right away. While he set up the machine, we made small talk. When he learned that I was a halfie, he started spitting out Chinese phrases he had picked up during his time working with Asian doctors in a laboratory. Ni hao ma. Ji cao fan. Xie xie.

Meanwhile, when I go to Chinese restaurants, I’m embarrassed that I can’t order in my mother’s native tongue. When I meet Spanish-speakers, I always downplay my fluency, because I know I’m rusty and don’t want to look stupid.

But I didn’t think this guy was stupid at all. I thought he was brave. I admired his hunger for knowledge and experience. His wide-open spirit. His willingness to embrace imperfection and to fail without fear.

"The only man who never makes mistakes is the man who never does anything." ~ Teddy Roosevelt Filter your failure. Then move forward.

A place for rough drafts

You don’t have to be flashy to shine