I remember being surprised that Hilary was a man.

Based on name alone, I was expecting a woman that first time I walked into Hilary Masters’s classroom. Instead, I found a grizzled old soul with sharp eyes, a gravelly voice, and sly wit. He was intimidating because he didn’t suffer fools or slackers. But he was always wise and generous in his guidance of our work. The more we gave, the more he gave. 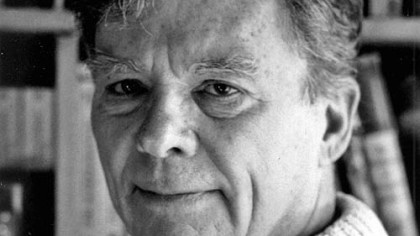 That first class took place in Baker Hall, in a plain white room with long tables arranged into a square. While other students filled in anywhere and everywhere except right next to the professor, I took to sitting just to the left of him. Later, the advanced classes grew smaller — and perhaps braver — until it was just half a dozen of us squeezed into Hilary’s office. The boys liked his lumpy green couch. The girls settled into various random and mismatched chairs.

Hilary always presided from the well-worn leather rolling chair at his desk. He listened thoughtfully to our excited chatter, indulging us for a few minutes at the beginning of every class. Then he called us to order and listened even more thoughtfully to the work we read aloud. His observations were specific and insightful, often leading us beyond the words that we had put on the page, to the deeper meaning and emotions underneath, which we hadn’t even realized we were excavating.

From Carnegie Mellon’s obituary for Hilary:

By senior year, I considered Hilary a mentor, and I asked him to supervise my thesis project. With humility — and a hint of warning — he accepted. Then he challenged me to write 10 new pages of my novel and show it to him every week, regardless of any other club, school, or Resident Life responsibilities I had. It was hard, but I did it. I wrote half of that novel under his guidance, won an award for my thesis presentation of it, and finished the draft a few months after graduating.

Hilary didn’t make me a writer, but he did make me a better writer. More than that, he opened up his heart and his home to me and a few of my classmates. I remember the awe we felt at being invited into his charming historic house, with all its worldly knickknacks from his long and fascinating life. I remember trying triple creme cheese for the first time, and daring to have a sip of wine. I remember sitting in the tiny room by the stairwell and talking about books late into the night.

Hilary Masters was a special man, and I feel fortunate to have known him. Friends are often teachers, and in this case, my teacher became my friend. He will be missed.

For more about Hilary’s full and interesting life, please read this lovely write-up in the New York Times.