It’s only a few minutes away from where you used to live, but this new neighborhood feels like a different planet. Free-standing houses bordered by driveways and fences. Sprinklers spitting water over grassy lawns. Golden Retrievers prancing with leashes in their mouths.

It’s a tranquil street connected to a busy road. Transco Tower winks in the distance. An occasional siren interrupts the night. Just around the corner, well-lit stores and restaurants buzz with traffic. The press of the city is comforting, in a way. 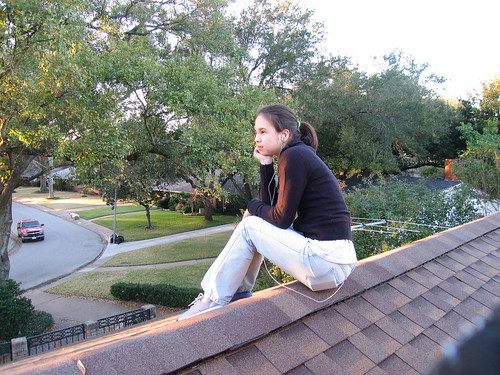 It’s dark wood paneling and big bubble skylights. The double-sided fireplace and a bookshelf that swings open on a hidden hinge. The plastic Christmas tree that never gets taken down, only put out of sight. A cardboard cutout of Captain Picard that you begged Blockbuster to give you.

It’s the packet of seeds you plant haphazardly in the backyard. (They never even sprout.)

It’s the jar of bitter sauce your mom brushes onto your hands to stop you from sucking your thumb. (You hide the jar and then claim the housekeeper must have misplaced it.)

It’s the tap on your window at five in the morning, the chili cheese fries slipped through the mail slot, and those furtive hours spent discovering both your body and his. (You love him, but you know it won’t last.)

It’s climbing the roof and writing song lyrics until the stars come out. Raking the leaves with your dad on a Sunday afternoon. Eating candied yams and Japanese cucumber at Thanksgiving. Dancing in the bathroom and learning how to drive. Pimples and cover-up and worrying about your weight. Birthday parties and Homecoming mums. Calculus and Nora Roberts.

It’s over twenty years of memories and secrets, conversations and tears. Impossible to capture.

It’s a place you take for granted, to be honest.

It’s stability and comfort, even in its decline.

It’s not going to be there forever, though. Appreciate it while you can.