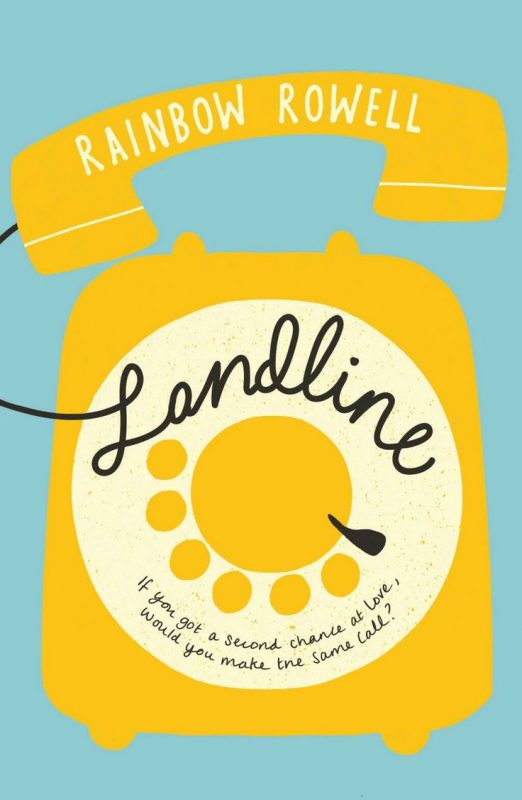 I first read LANDLINE back in 2014, shortly before my wedding. This was intentional, as I knew the book focused on marriage — what it’s like and what it means. Not that I was totally clueless about those things. Andy and I had been together for 9 years already, and living together for the vast majority of that time. For us, the wedding was sort of a formality, albeit a joyful one.

Last year I re-read LANDLINE (the audiobook version this time) and found myself drawn to many of the same insights about love and commitment and building a life together.

She hadn’t gotten to say “I love you” — Georgie always said “I love you,” and Neal always said it back, no matter how perfunctory it was. It was a safety check, proof that they were both still in this thing.

Andy says “I love you” to me every morning before he leaves for work. In some ways, it’s perfunctory. In same ways, it isn’t at all.

Georgie never thought she’d be old enough to talk about life in big decade-long chunks like this.

It’s not that she’d thought she was going to die before now — she just never imagined it would feel this way. The heaviness of the proportions. Twenty years with the same dream. Seventeen with the same man.

It felt like too much. Not too much to have, just too much to contemplate. Commitments like boulders that were too heavy to carry.

It astounds me that Andy and I have already spent about a third of our lives together. Before long, it will be half. And then more than half…

Neal was where Georgie plugged in, and synced up, and started fresh every day. He was the only one who knew her exactly as she was.

I actually think Andy feels even more this way about me than I do about him?

“Just because you love someone,” she said, “that doesn’t mean your lives will fit together.”

“Nobody’s lives just fit together,” Neal said. “Fitting together is something you work at. It’s something you make happen — because you love each other.”

“I’m not saying that everything will magically work out if people love each other enough… I’m just saying,” he went on, “maybe there’s no such thing as enough.”

Even though Andy and I have a pretty healthy and functional relationship, I try not to take it for granted. I try to remember that, as natural and “easy” as it feels now, getting to this point did take some work, and staying the course will too.

OK, I’m going to present the rest of these excerpts without my commentary. I think Rainbow’s words capture and convey everything all on their own anyway.

You don’t know when you’re twenty-three.

You don’t know what it really means to crawl into someone else’s life and stay there. You can’t see all the ways you’re going to get tangled, how you’re going to bond skin to skin. How the idea of separating will feel in five years, in ten — in fifteen. When Georgie thought about divorce now, she imagined lying side by side with Neal on two operating tables while a team of doctors tried to unthread their vascular systems.

She didn’t know at twenty-three.

Heather rolled her eyes. “Neal knew — he proposed to you.”

“It’s not like that,” Georgie said. “You’ll see. It’s more like you meet someone, and you fall in love, and you hope that that person is the one — and then at some point, you have to put down your chips. You just have to make a commitment and hope that you’re right.”

“No one else describes it that way.” Heather frowned. “Maybe you’re doing it wrong.”

“Obviously I’m doing it wrong,” Georgie said. “But I still think love feels that way for most people.”

“So you think most people bet everything, their whole lives, on hope. Just hoping that what they’re feeling is real.”

“What’s the ball a metaphor for?”

“I’m not sure,” Georgie said. “The relationship. Marriage.”

“Don’t be sorry,” he said. “I want you to take that for granted. I will love you no matter what.”

Georgie felt herself sliding out of control again. “Don’t say that. Take it back.”

“If you say that, it’s like you’re telling me that all the insensitive things I do are okay. It’s like you’re just handing me ‘no matter what.’ You’re pre-pardoning me.”

At least he could make sure he was with the right person.

Wasn’t that the point of life? To find someone to share it with?

And if you got that part right, how far wrong could you go? If you were standing next to the person you loved more than everything else, wasn’t everything else just scenery?