Yesterday I nearly ran over a turtle.

I was on my way home from Panera, and he was so small I could hardly see the little guy! I turned my wheel to avoid him, and checked in the rear view to make sure he was okay. He was, but I decided to back up and figure out how to get him out of the road. In the process, I scared and/or annoyed the heck out of some woman behind me. Sorry, woman, but adorable endangered turtle trumps your angry squinty glare. 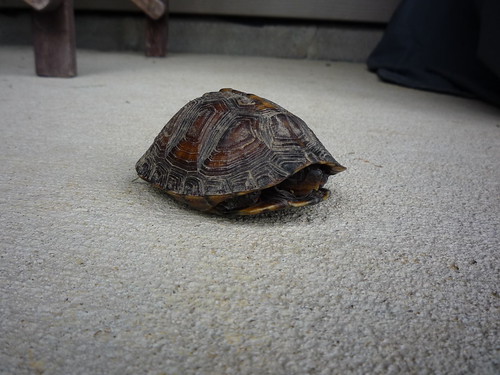 Adorable, yes? Endangered, no more! I saved him. I picked him up and put him in my car on the passenger side floor. I am a turtle hero.

When I got home, I let Riley sniff him, and then I set him down on our patio (and took some pictures, obviously). I considered keeping him in our bathtub so Andy could see him (because Andy loves turtles) but then I decided that would be (a) weird, (b) mean, and (c) really, really weird. Instead, I got out Andy’s old Golden Guide reference books and tried to figure out what kind of turtle he was. After comparing him to the pictures on every page (twice) I determined that I had absolutely NO idea what kind of turtle he was.

So now the little guy is now roaming free in my backyard, perhaps enjoying a swim in the creek or a stroll through the tall grasses. And me, I’m still a turtle hero. TURTLE. HERO. That noise you hear? It’s the turtles, singing my praises. Pretty, no?

Well, okay, the little guy didn’t exactly pop out of his shell and do a song and dance, but he did give me a gift.

He pooped in my car.