Per Michael Griffith’s suggestion last month, I looked up Cincinnati’s Mercantile Library, and it turns out they were about to host a “Literary Evening with Lisa See.” The same Lisa See whose heritage and identity I had pondered a month ago. How could I resist?!

Answer: I could not. So I quickly read Peony in Love (free online courtesy of the Cincinnati Public Library system) in preparation.

Thursday night I made my way downtown for the event. In the parking lot I spotted a group of older women holding copies of Snow Flower and the Secret Fan (See’s best novel, from what I’ve heard) and I asked if I could follow them. They were rather cute, as older people are wont to be, teasing each other and laughing like girls and chattering excitedly about meeting Lisa See. I was excited too, but I was also beginning to suspect that I might not, um, fit in.

This feeling was confirmed once we reached the reception area. I was one of two people under the age of 35, and the other was a daughter who had been roped into volunteering, I’m pretty sure. Soooo yeah. Awkward.

But actually, everyone was so friendly it didn’t matter. And Lisa See herself was mingling before her talk, munching on hors d’ouerves and catching up with her former Pilates instructor who had moved out here from LA. She noticed me hovering, waiting for my chance to talk to her, and welcomed me into their conversation. I told her why I was interested in her — Hi, I’m Miss Identity Crisis! Do you have one too? — and she told me to ask her about it during the Q&A session because she loves talking about it. She also recommended her (first?) book, On Gold Mountain, in which she discusses her family lineage and how she fits in (or doesn’t).

The Pilates instructor was a sweet, enthusiastic woman who invited me to sit next to her in the second row. From there we listened to Lisa explain how Peony in Love came to be, and I sort of wished I hadn’t read it until after I’d heard her talk, because I think knowing her ambitions and inspirations for the book would have added a very special layer to my reading and made the story more enjoyable.

Regardless, I was awed by her charm, her wit, her sincerity. She was very smooth and genuine. (And tiny!!) And she talked a lot with her hands. 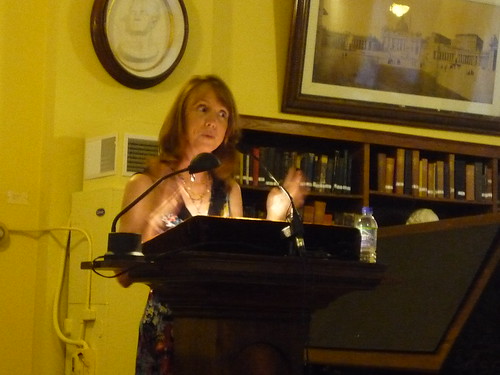 When she was done speaking, we had the Q&A, and she said several things that stuck with me.

(Note: Even though it’s in quotes, that’s actually a paraphrase of what she said. I can’t remember what I ate for lunch yesterday; do you really think I could remember someone’s exact words?)

I hung around afterward, hoping to get a moment with her again — I’d even made a little booklet out of Ama, in case she asked what kinds of things I wrote — but the line for autographs was long and the library’s director mentioned he was planning to see if Lisa wanted to grab a bite to eat since they’d scheduled her to speak over dinner. So I took advantage of what I’d learned (see #2 above) and decided to let her be. I can always try her online.