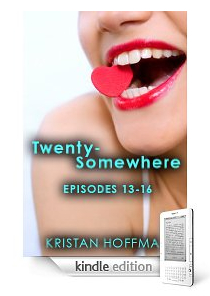 For those of you who read via RSS or just bypass the homepage, you may not know that I put up another Twenty-Somewhere episode bundle (13-16) today.

I’ve also created an Amazon store, which I will eventually integrate into this website. It’s just a convenient way to collect and display my offerings — and will hopefully extend to “real” published books later. But I’ve decided the website redesign should be a reward for successfully completing my August NaNoWriMo challenge, so for now the store remains external.

By the way, I need to give a big thanks to Albert for helping me pick photos for the 20SW covers, listening to me debate the redesign, and generally putting up with my crazy OCD indecisiveness. Everyone needs an Albert.

In writing news, I found this great, witty talk by author Jennifer Weiner (via Novelicious).

I tell everybody that I think the best thing for being a novelist is having been a reporter. With journalism you write every day. And especially if you’re working for the small daily papers, you write a lot every day. You write stories about the school board meeting and the sewage board hearing and the car crash and the fire and the bagel shop that closed. You do not romanticize the act of writing. You do not go to your editor on deadline and say, “I know the sewage board hearing story is due, but my muse has not spoken to me yet.” Your editors don’t want to hear about your muse.

Shh, don’t tell my dad. He’s a newspaper publisher, and he’ll say, I TOLD YOU SO!

And now, what you’ve all been waiting for…