First up, from Episode 33 of Twenty-Somewhere:

When Sophie finishes her drink, she turns to set it on the counter. The man turns also, and their eyes meet. His are a greenish-brown, and penetrating.

“Sophie.” She offers her hand and he accepts. He shakes it firmly, American style. For no reason at all, she finds this comforting. “I’m sorry if I’ve been standoffish. You caught me on a weird night.”

“That’s twice you apologize. And yet you say you are fine.” He shakes his head. “You are not fine. But maybe a dance will help.”

“A dance.” He gestures to the crowd. “Do you want to dance?”

Yes, that’s right, another one already! In spite of NaNoWriMo — or maybe because of it? — I have been pushing forward with 20SW. My goal is still to finish through Episode 40 (my temporary stopping point) by the end of 2009, which means one episode a week, plus one week with two. o_O It’ll be a doozy of an effort.

Anyway, be sure to read Episode 33 in full and let me know what you think in the comments!

I also got the previous 4 episodes up in their Amazon bundle, for anyone who wants to read 20SW via their Kindle/iPhone/iPod Touch: 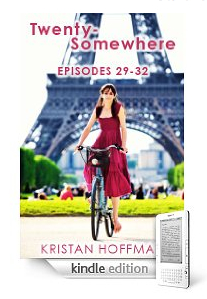 And finally, a couple writerly links/snippets for the week:

Awesome YA authors (and husband/wife duo!) Justine Larbalestier and Scott Westerfield have blogs! News to me, but probably not to them. Full of good stuff, Justine’s especially, including NaNo tips all this month.

Writer T.J. McIntyre talks about 5 things he’s learned so far on his journey to becoming an author. My favorite part:

5) Don’t Get Bitter, Get Better — Not everyone finds success at the same time. Some authors take more time to get to the point where they are publishable than others. Some authors have connections, others don’t. Some live in New York, others (like me) live in the middle of nowhere. Some have a platform (like all those celebrity-authors on the bookstore shelf), while others are destined to struggle with obscurity.  This is okay. It is the way it has always been and will always be. Accept it.

Here’s what matters: Enjoy your work. I wrote long before I started trying to get published, and I will keep writing whether it gets published or not. It is just a part of who I am. It is part of how I process the world around me. Besides, it’s FUN!

And Steven Pressfield, author of The Legend of Bagger Vance (later a Will Smith movie), has an inspiring series called Writing Wednesdays. Thanks to Aurora for pointing me to that one!