For those of you who missed it, Part 1 of this interview “aired” on Wednesday.

Aaand we’re back. So, Todd, let’s hear how 9A finally got from brain to bookshelf.

The Ninth Avatar started as an idea for a trilogy, and once I had the first “book” written (what became the first “half” of 9A) and ran it through a few rounds of edits and beta-reads, I did what a lot of writers do. I went straight into the query process.

Not that this is an outright mistake or anything, but I can say now that neither I nor the work was ready. We each needed more of a chance to mature. My numerous synopses and query letters were pretty lame, so I got a lot of form rejections. I wasn’t just sitting on my hands, though, because I wanted to continue the story into “book 2” and I also had another project I was working on (which eventually became my religious satire, Thomas Redpool Goes To Hell).

About halfway through writing “book 2,” I realized I didn’t have enough story for a “book 3.” This may sound odd, but it was one of those instinctual notions; I didn’t want to try to stretch the story, I wanted to keep it tense and coherent. So, two books became one, and I wrote all the way to the ending I thought it deserved. After a few more rounds of edits, I figured it was time to submit again.

I got more of a reaction this time, but it was mixed. One agent thought the MS was too long (at 154,000 words) which is a valid concern, especially for a debut author, and I received some more form rejections. I decided that, while I continued to work on other projects, the best way to move this one forward was to self-publish it. I figured the worst case would be a few people might read it, and maybe it would get my name out there. I never meant for self-publishing to be my “ultimate” goal, merely a stepping stone to other things, but I put as much effort into it as I could.

Months later, through a contact at my critique group I heard about Trapdoor Books and contacted the head of the startup publisher directly. He read both of my completed works, Thomas Redpool and The Ninth Avatar, then had others read them as well, and offered to acquire and publish the latter. After more rounds of edits, a new cover, design treatment, and months of discussion, the final version of the book is in its first print run of 5000 copies (including both trade paperback and hardcover) It’s also available in various electronic formats. 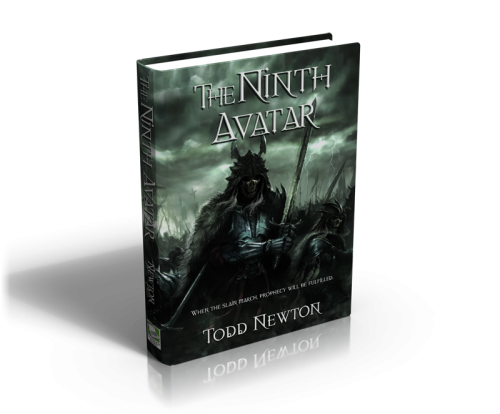 The story’s come quite a ways from being nothing but a hand-drawn map, a ton of concept art, and a meandering “summary” of chapters, and hopefully still has a long journey ahead of it.

Now that you can look back on this whole crazy journey, what was the hardest part of writing 9A?

The constant creeping suspicion that I had no idea what I was doing. More than anything else, we writers need confidence in our project and our process. I’m very lucky to have people around me who push me forward, like my wife and other writers, but during your first novel there is a lot of room for doubts like, “Can I really do this?” I obsessed about a lot of things that, in retrospect, proved to be far less important than people in the industry purport them to be. I should have been focusing on just getting it done.

Mmm, I definitely hear that… Well, on the flip side, what was the best part of writing 9A?

For me, the best part is when people read my work and have some kind of emotional reaction. Whether it is a resonance with the characters, agreement or disagreement with the concepts and conclusions, or just plain honest criticism, nothing beats the accomplishment of having created a coherent story that people respond to. Smaller victories include nailing a scene, not just getting excited that I wrote something the way it came together in my head but also that elation of “Now I get to have the character do this!” Writing is and always should be fun, otherwise we wouldn’t do it. That’s just the bottom line.

Writing is always fun, eh? I must be doing something wrong… Help me! What is your process like?

Disorganized. I am the epitome of a Type B personality, so I tend to write “organically,” which is a nice way of saying “by the seat of my pants.” Expanding on ideas as they come, focusing on the creativity aspect of writing; these are a few of my favorite things. I’m terrible at outlining, and I tend to under-write during my first draft, many times ignoring my responsibility to “describe” a scene in favor of just getting to the point. To write, all I need is a comfortable chair, my laptop & headphones, and a place that minimizes distraction. It also helps if I don’t have access to the Internet, which is why you can find me a Starbucks when I really want to get some work done on a project.

Ah, now I know the secret!

Well, hopefully this isn’t a secret: Do you have any other books or projects in the works?

Now that The Ninth Avatar is finished, the marketing push is ready to begin. The publisher and I will be posting on the Trapdoor Books blog with news and updates, and hopefully there will be something to tell soon about a possible “alternate reality game” as well as an iPhone app. But these are still under development.

My second book, Thomas Redpool Goes To Hell, is finished but not published in any form just yet. I’m kicking around the idea of doing a Podiobooks version of it. I’m also working on another Fantasy novel, a standalone separate from 9A’s universe, called Scions of the Shade. It’s coming along, but don’t get the idea that subsequent books get any easier to write (or finish!).

I do plan to return to 9A’s universe, though. After I finish Scions, I want to try my hand at writing a prequel & sequel in tandem, to be released that way as well. It should be fun and a challenge, which is everything a writer needs.

Indeed! Thanks again, Todd, for taking the time to tell us about your debut novel and all the hard (but fun!) work that went into it. I’m really excited for you, and I know 9A’s going to do great!

Readers, if you have any questions for Todd, I’m sure he’d be happy to field them in the comments section. Don’t forget to visit him on the web and/or order your copy of The Ninth Avatar!