My last interview was for my high school newspaper staff, so I think Todd Newton deserves major props for being my first victim guinea pig interviewee in a while. I forget how exactly we met, but Todd is a fellow writer, and we’ve become blog-buddies over the past year or so. His fantasy novel The Ninth Avatar has been on a very interesting journey, and he was kind enough to take a few moments to tell us about it. 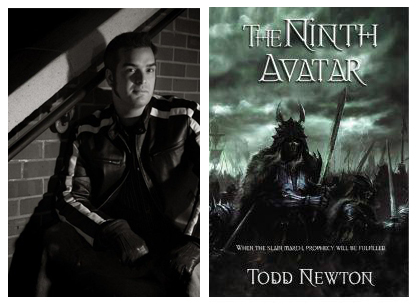 Todd and his book

I’m originally from a small town in Northern California but I’ve moved around a lot over the years, eventually ending up here in Denver where I plan to stay. I’ve been an avid Fantasy reader since about age 12, and have been trying to write my own since around the same time. As for hobbies, these days I enjoy smoking cigars, playing KOEI’s Warriors games on my Playstation, and traveling as much as I possibly can. I’m married to a wonderful, beautiful lady named Micah, and we have two dogs named Leonidas (aka Leo, named after the character from 300) and Suki. Both the pups are full grown at around 18 pounds, and they’re mixed-breed rescue dogs.

Aww, they are the perfect size to play with Riley, who is also a mixed breed rescue dog! Too bad there are no such things as online puppy play dates.

Alright, second thing’s second. What is The Ninth Avatar?

Well, don’t let the term “epic fantasy” fool you. The Ninth Avatar is very much a story about characters and how their lives intertwine and connect. The main protagonist, Starka, has a lot to deal with as an outcast priestess already, but when she receives a prophecy that seemingly has nothing to do with her religion, her simple life turns incredibly complicated.

While she’s on this journey of self-discovery to keep the prophecy from coming true, characters like Cairos (a wizard) and DaVille are seeking revenge for betrayals against them, while still other characters are seeking justice for their demolished homelands.

I think the two major themes in this work are that war is cataclysmic, and that the role of religion should focus more on bringing people together than keeping them apart. The swords and magic are fun and exciting, don’t get me wrong, but there’s a lot more going on in the story than that.

Is “9A” the first book you’ve written?

Yes, it’s the first book I started that I was able to finish. Like a lot of the writers I’ve met (through my critique group and otherwise), I had quite a few false starts over the years that turned into learning experiences.

Ooo, any lessons from those false starts that you can share with us?

The biggest things for me were to relax, don’t obsess about word count or whatever else the industry or the books you read say “you must have.” Just write the best story you can, then edit it to make it better. Find a way to take yourself and your work seriously without becoming a complete maniac about it.

Along with that, think of writing a novel like building a house. You want to build a house that you’d actually live in, right? Don’t expect other people to live in it if you wouldn’t do so yourself.

I love that analogy. So, are you “building any more houses” now that 9A is done?

I’ve since completed one other book and I’m currently 2/3rds of the way through a third. For anyone who’s curious on how to finish a novel, the secret is writing a story you truly believe in, especially because finishing the writing part is not the final step. An important step, to be sure, but not nearly the end of the process.

Hmm, sounds like you know a bit about long processes. Can you tell us about 9A’s journey to publication?

Do you have a few hours? (Seriously.)

Haha, alright, let’s start at the beginning then. How did you come up with and develop the idea for 9A?

When I finished getting my BS in Computer Science, all I wanted to do was design video games. Ultimately I ended up with somewhat of a “garage” design group and I was enlisted to write the story for their game. When the project later fell apart, I figured why not turn it into a novel, so I bought half a dozen books on writing and gave it a try. As I worked more on it, my confidence about it grew, and I decided this “writing books” thing was something I really enjoyed.

Funny, I studied compsci for a while too…

Alright, folks, that’s it for today. Don’t forget to come back for Part 2 of the interview on Friday. That’s when Todd will spill the beans about 9A’s special road to publication, as well as his writing process and future plans!