While Amazon tortured me by withholding my (pre-ordered!) Mockingjay, Sarah sent me a little something to tide me over: 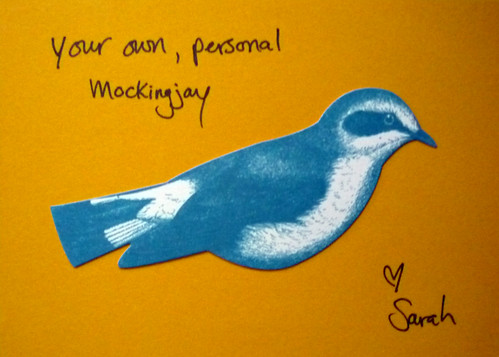 Fortunately a coworker lent me her copy of the book (which she pre-ordered and then picked up from Barnes & Noble) and I read it yesterday. Folks, I was WRECKED after I finished that book.

If you want to know exactly how I felt about it, good and bad, check out JJ’s post (warning: MAJOR SPOILERS). She pretty much hit every nail on the head for me.

(There are some great discussions going on in the comments over there too.)

But if you’re not spoiler ready, or you just don’t care that much, let me talk about the book in broader terms. Truthfully, it was my least favorite of the series. I didn’t feel fully prepared by Hunger Games or Catching Fire for what Collins wrote in Mockingjay. The first 2 books were “adventure” stories; this last one was war. In Mockingjay, Collins took every good thing and broke it. She broke Katniss. And that was so, SO hard to read.

But the good kind of hard, you know?

Overall the writing in MJ was solid, and just as un-put-down-able as HG and CF. The pacing was a bit off, like she could have used 4 books instead of 3… But the twists, the characters, the way she brought things full circle from earlier books and scenes — that was all impeccable. Collins has a gift, and I hope I can reach that level of storytelling someday.

Maybe I would have done a few things differently, but as a whole, I think the trilogy is spectacular. Similar to Harry Potter, in some regards. (That’s another series I need to re-read…)

And if nothing else, Hunger Games has really opened my eyes to what a book can do. What a writer can do. What I could do. It has inspired me in so many ways for my next manuscript, Mountain Girls. (That’s a project name, not a real title.)

Now it’s just a matter of sitting down at the keyboard and making. it. happen!