Update: Apparently Amy Chua has defended Brett Kavanaugh, as well as her own husband, whose behavior as a professor at Yale has been questioned for being inappropriate. Given this, I cannot support her or her book. However, the post below is really about my mom and my relationship with her, not Chua’s book, so I am going to leave it here for that reason.

If you haven’t heard about Amy Chua’s BATTLE HYMN OF THE TIGER MOTHER, then you’re probably living under a rock. (Also, you’re probably not Asian.) Regardless, the short version of this story goes: Chua wrote a memoir about her experiences as a parent, the Wall Street Journal printed excerpts from it under the headline “Why Chinese Mothers Are Superior,” and teh interwebz exploded.

I am not here to debate the contents of Chua’s memoir or her parenting methods. I am not here to discuss how the WSJ presented said contents/methods, nor what effect that had on people’s impressions of Chua and her book. I am not here to call anyone or anything Good, Bad, Right, or Wrong. Because as I said earlier in my post on book reviews, those labels are not all that productive.

What I do want to do, though, is to reiterate what Jenny Zhang said in her excellent Jezebel piece “‘Tiger Mothers’ Aren’t the Whole Story”:

Somehow, despite the ridiculous tone of Chua’s essay, I can’t help but feel a kind of tenderness toward her, especially after learning that she didn’t choose the aggressively provocative article, and that the rest of her book from which the article is excerpted is a lot more self-disparaging and self-searching. But mostly, I feel sorry for her and anxious to see what sort of dialogue arises from this article because as Chimamanda Adichie says so beautifully in her TED speech, “The danger of a single story,” where she proposes, “The consequence of the single story is this: It robs people of dignity. It makes our recognition of our equal humanity difficult. It emphasizes how we are different rather than how we are similar.”

And I, and many, many more Asian and Asian American bloggers can assure you that Amy Chua’s story is just that: a single story.

My relationship with my mother is way too complex to capture in a few hundred words. (Hence why I have a whole novel planned.) (Just kidding!) (Sort of…) Still, I’ll do my best. 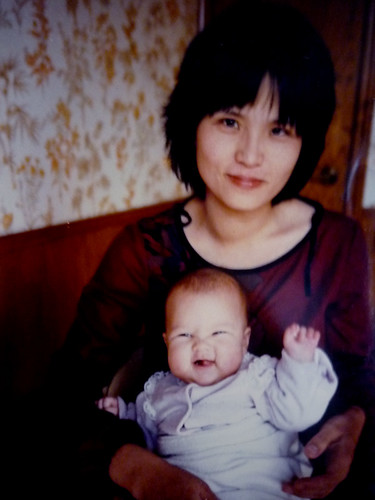 I am an only child. My mom is the second youngest of six. She came to America in her late 20s, leaving behind everyone and everything she knew. She had me in her mid 30s, after years of not being sure she was ready, or even wanted, to be a mother.

She instantly loved me more than anything else in the whole world.

She put me in pre-school when I was two and a half. Starting with kindergarten, I went to summer school every year, not because I had failed a class but because my mom wanted me to learn more. (And because she worked.) She made me skip fourth grade, even though I cried about leaving all my friends, because she didn’t think I was being challenged enough. She put me in all the best, most competitive public schools, and she spanked me the first time I got a B.

She felt a little guilty about not giving me any brothers or sisters, so she made sure I had plenty of friends. She signed me up for piano and Chinese school (of course) as well as ballet, soccer, and computer classes. She made me earn every toy I wanted, either through good grades or helping out at her office, but she never said no to a book. Most importantly, she encouraged my love of writing.

As I got older, she was honest with me about things like love and sex. She didn’t hesitate to say if I looked pretty. Or fat. Sometimes she told me more than I probably should have known, about her life or her feelings, and it made me sad. But it also made me strong.

We have always fought, because I have a sassy mouth, and she subscribes to the belief that parents are right 100% of the time, even when they’re actually wrong. She wants me to be an independent woman, but she also thinks of me as her kid forever. She wants me to see the world, but she also wishes I would come home more often.

Was she a “regular” American parent? Sometimes. (I watched Disney movies. I played with Polly Pockets.) Was she a “crazy Asian mother”? Sometimes. (I got pork buns and lychee jello for lunch. I had a freaking curfew until I graduated from college.)