Picture a thirty-something Asian man from California who went to West Point Academy and served as an Army Captain in Afghanistan. Now picture him living in Cincinnati and working with my boyfriend. Picture them hitting it off through a mutual love of practical jokes and other ridiculous things (like a giant poster of David Hasselhoff as Knight Rider, or Ascot Friday). Now picture my boyfriend nominating that man for a radio station’s contest to find Cincinnati’s Hottest Bachelor.

You have just pictured the last two weeks of my life.

What started as a prank turned into an all-out, world-wide campaign for J.W. (I’ll use his initials to spare him any (further) embarrassment.) At first Andy sent the email and link to vote to only a handful of close friends and colleagues. Each of them in turn forwarded the email to (I’m sure) only a handful of close friends and colleagues. From there, things began to snowball, and by the end of the first day of voting, J.W. was neck-and-neck with 2 other men in a field of over 40.

That’s when Andy got serious.

Andy has always been one of the most focused, dedicated, hard-working people I know. (Robot, I may have called him on occasion.) But he tackled this challenge with more passion and childlike excitement than I have ever seen. Every morning he would wake up and ask me, “Who’s in the lead?” Every night when he came home he would say to me urgently, “Did you vote yet? You have to vote!”

Vote we did. And after a couple days, J.W. and some guy named “Dreamboat” had taken the lead. They were unreachable.

Then something changed. The radio station hid the vote counts. They wanted the winner to be a surprise. Andy got nervous. Would our friends stop voting if they couldn’t see a direct correlation between their click and J.W.’s odds of success? Would Dreamboat take the lead without us even knowing? Were all of our hopes and dreams about to come crashing down?!

Instead of just sitting around, worrying and moping, Andy took action. He appointed himself J.W.’s campaign manager and sent out daily reminders to vote, full of rousing language and embarrassing praise for (or jabs at) J.W. He created a slogan. He even recorded an audio ad based off the Dos Equis “Most Interesting Man In the World” commercials. (FYI, it is AMAZING. He sent it in to the radio station but I don’t think they ever played it.) And he did all of this while working full-time, going to MBA classes at night, reassuring his girlfriend that her decision to quit her job and write wasn’t insane, cooking dinner, playing with the dog, and watching Syracuse basketball games.

At last came the night. The night. The night of the radio station’s “Little Red Dress” party, where women could mingle with the bachelors and then Cincinnati’s Hottest would be announced. The night was last night, and let me tell you, Andy was as fidgety as a kid on his way to Disney World.

You may have already guessed this, but I’ll say it anyway: J.W. won. Andy’s efforts were rewarded. We all lost our voices cheering with glee. (We had the largest fan contingency by far.)

After we went home that night, I couldn’t help reflecting on the series of events that had led us to that glorious victory. I realized that what had started as a mere joke, a little email, had spread like wildfire, and erupted into a story that I think Andy will tell for 100 years. Was J.W. the most likely candidate? No. But he had friends, and his friends had faith. One friend in particular went the extra mile. And that’s all it took.

Anything is possible. Even this: 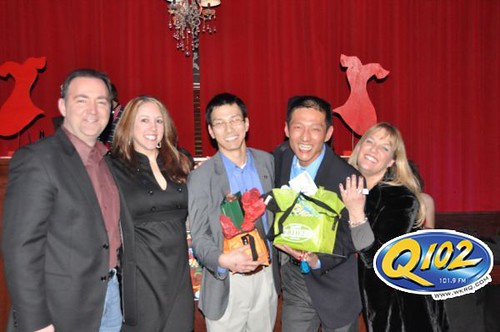