I grew up on the water, but I didn’t always love it. As a girl I feared the crash of the waves, and the dreadful dip down into the sea. But I became older and braver (and my dad became a better sailor). The boat is now a happy place, an escape, an inner peace manifested. I look forward to being surrounded by blue of all different shades. I look forward to the rhythmic song of the waves, to the openness of the sky, to the cradling. Day or night, I feel a vastness around me. Within it I am not small, but exactly the right size. 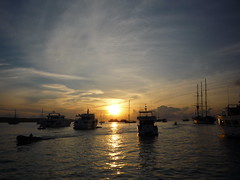 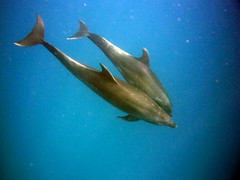 I have never been a great swimmer. Once I nearly drowned at a beach in Valencia. I was with friends, but they had gotten ahead of me. Since then, I’ve been afraid to be in the back. What if the water tries to claim me again? What if no one notices until it’s too late?

But I refuse to live a fearful life, so I swim, and when I fall behind, I move forward as best I can.

There are sharks in the Galapagos. Yes, I refuse to live a fearful life, but still I felt the fear. Of blood and teeth and the Jaws theme song. Of becoming one of those unlikely statistics. Of losing a limb — or worse, a friend. Yes, I felt the fear.

Naturally, during our very first snorkel, we saw a shark nearby.

After a few electric heartbeats, it was fine. He didn’t come after me, he didn’t want my flesh. He didn’t even care that I was there, really. He was nothing to fear. 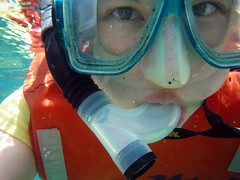 It’s easy to understand why we create fairytales about mermaids and lost cities under the sea. There’s so much life below the water, so much color and motion. There are stories to be told, and feelings to be felt. There is life and death and love and wonder and ruthlessness and cunning and loyalty.

When I saw a penguin swimming right beside me, I lost my breath entirely. I became a child. I watched, starry-eyed, and I giggled like I never do. I tried to keep up, tried to catch the little elf, but I have never been a good swimmer. So I let him dance in circles around me. I let myself live a little fairytale. 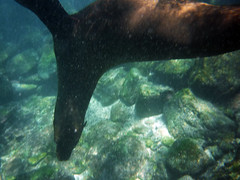