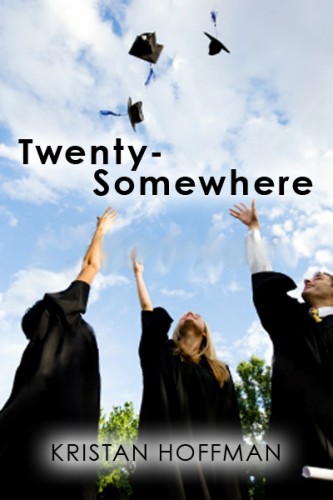 This is a re-post of my holiday episode of Twenty-Somewhere. You can find the full story (all 40 episodes) in ebook form at Amazon, iTunes, BN.com, Sony, Kobo, and Smashwords.

Ah, the holiday season. A time of joy and laughter and relaxation. Days full of mirth and miracles and magic. A period of reflection, introspection, and appreciation. The most wonderful time of the year!

Until you turn twenty.

After that, it’s the rigors of end-of-term exams, or the hassle of traveling home via crowded airports and interstates, or the stress of finding fabulous gifts for all your family and friends – without zeroing out your bank account. Growing up is the difference between believing in Santa Claus and being Santa Claus.

MJ begins her holiday journey stranded in the UK. Her flight to Newark has been canceled, and if she doesn’t get another one soon, she won’t make it home in time for Christmas.

Claudia decides to drive from her new home in the Midwest back to Texas. Since Eli is flying to see his family, she’s in charge of their puppy Max, who whines incessantly for thirty miles. Her nerves are shot by the time she crosses the first state line, and there are still twelve more hours to go.

Sophie, of course, is working on Christmas Eve. Technically it’s a holiday, but in reality their biggest international client could care less. A deadline is a deadline.

Rather than crowd the service desk with all the other disgruntled Americans, MJ sits patiently at what was supposed to be her gate. Airline staff discuss the remaining flights over their walkie talkies, and MJ realizes there are just four seats available for nearly a hundred passengers. She sighs and stands, headed for the pay phones to call her parents and deliver the bad news. Just then, a nearby elderly man loses his grip on the armful of packages he is carrying. MJ quickly catches them before they crash to the floor.

“Oh, thank you! These are toys for my grandchildren. I guess I got a little carried away buying so many…” He smiles sheepishly. In no rush to catch a flight, MJ helps carry the gifts all the way to the Arrivals area, where the man’s daughter is waiting with her twin boys.

When MJ returns to her gate, one of the airline staff members motions for her to come over to his desk. When she gets there, he hands her a ticket. “I saw what you did for that old man,” he says. She starts to protest, feeling guilty as she thinks of all the other people at the service counter who surely want to return to their families too, but he cuts her off. “You started the holiday cheer. I’m just following your lead.”

Somewhere in Oklahoma, Claudia feels a weird bump as she drives over an old bridge. Suddenly her car tilts and begins to make an awful thumping noise. She pulls over on the side of the interstate and sees the flat tire. She wants to cry, but Max is already making more of a fuss than she ever could.

She remembers an exit not too far back, with signs advertising food and gas. She is debating whether or not to walk back when a car pulls off the road and stops in front of hers. As it reverses, she discreetly slips her cellphone into her pocket and hits 9-1. She waits to see what else will happen before dialing the rest.

A man emerges from the car and says, “Need a hand?”

Wary, she shakes her head.

She’s about to say no again, but a small voice interrupts her. “Daddy, where are we?” A little girl pokes her head up from the back seat of the man’s car.

After he explains to his daughter that he’s going to help this nice young lady whose car has a problem, Claudia hangs up her phone and shows him the spare in her trunk. When he finishes, Claudia wonders if it would be inappropriate to give him money as a thank you for his assistance. She reaches for her purse, but he shakes his head. “That’s not necessary,” he says. “When I saw you on the side of the road, I pictured my own little girl.”

They both look over to his car, and are surprised to see not just his daughter, but Max as well. The girl heard his puppy cries and came over to let him out. She holds his leash firmly as they play carefully away from the road, and he licks her hands and face enthusiastically.

At the office of Arden Advertising, Sophie rubs her eyes and glances at the clock. MJ should be landing shortly, and Claudia is probably settling in at home. Meanwhile Sophie is facing another hour or two at work.

The only silver lining is that she isn’t alone. Among those assigned to her project is the new and gorgeous copywriter Diego. He’s very talented, but she can tell he is still nervous about his new setting, his new country. Throughout the night, the team members stray off-topic, discussing their upcoming holiday or new year plans. Only Diego stays silent. And Sophie notices.

As they are finally wrapping up, she approaches him in the corner of the conference room. “Diego, are you doing anything special for the holidays?”

“No… My family is all in Venezuela, and it is too expensive and too late to fly back to be with them.” The wistful look on his beautiful face breaks Sophie’s heart.

“Do you want to come to my place?” she asks. His hesitation prompts her to clarify. “For Christmas dinner! Tonight. I’m having a few friends over to celebrate.”

In reality, it is just supposed to be her and X, who is back home for the holidays. Their plan was to have a quiet night together catching up, and then she would drop him off at his parents’ house in the morning on the way to her own. But she knows of a couple other people she can call in a pinch, and she figures X won’t mind – too much – that she wanted to make a new coworker feel welcome.

Some do it for strangers, some for their children, some for just a smile. Santa does it for cookies and milk. Whatever your reasons, be sure to spread some holiday cheer this season. It’s the best gift you can give.