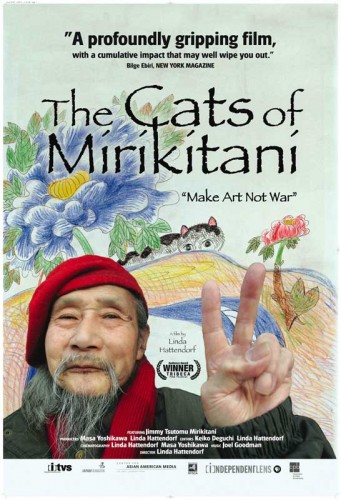 I don’t typically blog on/about Sept 11. Last year was an exception, and my thoughts weren’t only about the anniversary, but they happened to coincide nicely.

The other day, my mom suggested that I watch this documentary called The Cats of Mirikitani. Today, of all days, I finally watched it. It’s about an elderly, homeless Japanese-American whom the filmmaker sees every day in her neighborhood and begins to worry about. But he’s content to live and sleep on the streets of Soho, so long as he’s making his art. And that’s the part that I think my mother wanted me to see. That tunnel-vision passion. That ability to subsist on one’s dream and little else.

And I did see that, and appreciate it, and admire it.

But I also saw the part where the Twin Towers bled flame, and smoke swallowed the sky, and dust and ash flooded through the city like rivers overflowing their banks. Caught unaware, I started to cry. I didn’t know this would be part of the story. But really, how could it not be? Is there any American life that isn’t touched by that day? By those terrifying images?

(How weird is it that the post-Sept 11 babies are almost teenagers now? That they have no memories of what happened, besides the ones passed down to them? That eventually there will be babies for whom Sept 11 means practically nothing? Just another date on the calendar. Another tick on a timeline for history class. Another melodramatic story that their grandparents tell. Time marches on…)

As New York City becomes a ghost town of sorrow, danger, and uncertainty, the filmmaker invites Mirikitani into her home. She learns more about his past, and as a result, the documentary begins to juxtapose his experiences in the Tule Lake internment camp (after the Pearl Harbor attacks) with the racially charged aftermath of Sept 11. The verbal slurs. The physical attacks. The vandalism, arson, assault, shootings, and harrassment. The way neighbors suddenly looked like strangers. The way friends suddenly acted like foes.

It was a stark reminder that not everything — or perhaps everyone — in America came out better and brighter. That not everything that rose from the ashes of the World Trade Center was triumphant. That for all the incredible, inspiring bravery and beauty of human spirit that we saw, there was some ugliness too. That when we say “never forget,” we have to remember everything, and learn from our own dark side as much as from our enemy’s.

I know that might not be a popular sentiment, but I thought it was too important not to say.