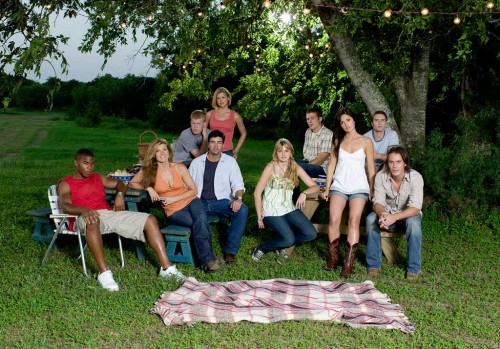 Since I tend to resist things that are hugely hyped, I avoided FNL for a long, long time. Finally, the dust settled — to the point that I forgot about the show entirely, in fact, until a friend brought it up in book club last year. Then, thanks to Netflix, I was able to watch all 5 seasons of what I can now say is one of my all-time favorite TV series.

Why do I (and millions of others) love FNL so much?

Contrary to the popular belief that marriages make for boring television, the Taylors serve as the backbone for FNL and all its drama. But they are not the source of drama, usually. They love, respect, and support one another, even when they completely disagree. And through 5 seasons, there are no affairs, no big deceits. Coach and Mrs. Coach tackle a lot of problems over the years, but always as a team. In a world full of adultery and backstabbing, both on screen and in real life, that is so, so refreshing.

I won’t give away who succeeds and who fails, but I will say that FNL takes you on one heck of an emotional roller coaster to find out.

Black-or-white morality tales are for kids. Real life — and therefore, good stories — live in the gray. It’s not about “good” versus “evil” — but rather, a bunch of flawed human beings doing their best. Each character is just fumbling toward their hopes and dreams and ambitions, and making mistakes along the way.

Example: Tim Riggins, everyone’s favorite bad boy. He feels guilty for not protecting his best friend. Anguished about loving a girl he can’t have. Ashamed of his drunkard father and loser brother, and even more ashamed of how much he takes after them both. He’s a playboy with a good heart and a lot of talent. He wants to be better than the path he’s on.

Or: Buddy Garrity, the former Big Man on Campus, the hotshot, the hypocrite. He’s a lousy husband, and not much better as a father, but he loves Dillon and he loves the Panthers. He’d do anything for his team — even if it’s a little shady.

Characters like these (and oh so many more FNL favorites) are the reason I read and write.

Something FNL does exceptionally well is flip between the adults and the teens. Most stories let one or the other be props. I mean, there are a lot of orphans in YA lit, and a lot of kids taking care of themselves off-screen in television and movies.

But in Dillon, TX, we get to see things from both sides. Student or teacher, player or coach, child or parent — every character is nuanced, everyone gets treated as real and worthy of our attention. This means the storylines appeal across a wide age range. We get to see things from multiple sides. And we get deeper, more genuine relationships.

There are probably a dozen other things I could point out that make FNL great and set it apart from most other TV shows, but I think you get the point.

(Also, FYI: you really don’t have to like football, or even understand it, to enjoy the show.)

Part of the reason I’m picking FNL apart today is to remember and share what the series taught me as a writer. Another reason is that all these elements are on my “wishlist” as a reader and viewer — they’re what I want to see more of in the stories that I consume — and there was a big discussion about that on Twitter today. You can check out #RBWL (reader/blogger wishlist) for more.