Venice was a dream come true. The canals, like veins, coursing through the living breathing city. The motorboats and gondolas and vaporettos, gliding through the water, criss-crossing each other’s wakes. The sun rising over the islands of Burano and Murano, where ladies stitch lace and artisans meld glass. The sun setting over St. Mark’s Square and the Doge’s Palace, where once an empire was run.

At long last, I was standing in the city that I had always wanted to see most in the world. It was as beautiful as I had imagined, and then some. Mossy docks, windowed waterfront façades, doors that opened right onto the sea. A hundred tiny bridges connected one neighborhood to the next. Each narrow alley was a secret whispered between the larger fondamentas.

(Also, the complete lack of cars gave the city an almost out-of-time feeling. If you ignored all the smartphones and modern fashions, anyway.)

Our stay in Venice was brief but unforgettable. And as I leaned against the cool stone railing of the Rialto Bridge, looking down over the glistening Grand Canal, there may even have been tears in my eyes.

Shortly after The Call, the first agent sent me a follow-up email that was, in a word, epic. Her passion and understanding for my story came through in every sentence. As the days passed and the details of our phone conversation began to fade, I had only to re-read that email for all the emotions to come flooding back.

This was real. My book had found a champion.

Our last stop in Italy was Bologna, the food capital. Andy found an excellent tour, which took us to a certified parmigiano-reggiano factory, as well as a private manor where dozens of batteria sat for years, brewing traditional balsamic. We watched burly-armed men wrangle cheese curds out of 200-gallon vats, then explored the “library of cheese,” a compendium of yellowing wheels just waiting for their perfect age. We peered into dark barrels and sniffed the sharp, sweet aroma of grape must.

It was all so beautiful and delicious, but no more food ever again, please.

Despite of a series of almost-catastrophes getting to and through Milan, we made it home late on a Sunday night. On Monday afternoon, I had a call with the second agent. She was supremely lovely, had many kind things to say about me and my book, and came from an incredible agency. Once again, I felt delighted, amazed, honored.

The ten-day deadline passed, and in the end my choice came down to these two. Both agents had strong sales records and were well-liked in the writing community. Both had confidence in me and seemed like great people. Both would no doubt help me to succeed.

What I kept coming back to was that follow-up email. Not even so much the email itself, but what the email said without saying — and what it made me feel without trying. Every time I read over her words, I was reminded of how well the first agent and I had clicked, both personally and professionally. How perfectly tuned-in to my characters and themes she was. How supportive she sounded about where I wanted to take my career.

When I called to accept her offer, she sounded even giddier than I did. Don’t get me wrong: I was giddy. My voice might have been steady, but my hands were shaking, and after we hung up, I jumped around the house like a loon.

And to be honest, I kind of feel like doing that again now. Because it’s time (FINALLY) for the big reveal.

The agent who wrote that follow-up email — the agent who is now representing me and my book (!!!) — is none other than… 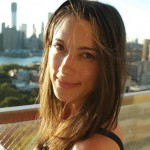 I can’t even begin to tell you what it means to me to have Tina on my team. I know that this is just one milestone, one hurdle, of many more to come — but everything feels more possible, more manageable, more hopeful, with her helping me through it.

Just like getting to this point felt more possible, more manageable, and more hopeful with all of my family and friends — that means YOU — helping me through it.

Thanks, guys. Y’ll are the best.