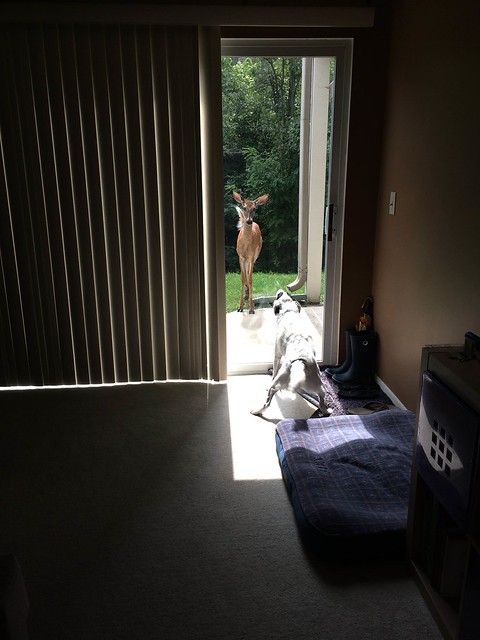 I can’t stop thinking about this deer.

It came up to my window yesterday just before noon. I really think if the sliding door had been open, it would have walked right into the house. It seemed startled but unafraid of Riley, who was going berserk at it. It simply stood there and watched him with large, soulful eyes.

At first I thought the deer was just cute, and the situation kind of cool. I noted the deer’s freckled fur, its adorable alert ears, its dark and delicate hooves. I marveled at how close and how calm it was. I wondered why it had chosen my door.

Then, as I walked over to grab Riley and carry him to his pen, I saw that the deer was injured. One of its back legs was mangled at the ankle, with flesh and muscle exposed. A few flies were buzzing around, trying to take advantage. When I approached, the deer moved away, surprisingly quick in spite of its wound.

Ignoring Riley’s growls and yelps of protest, I grabbed some vegetables from my fridge and went outside to see if I could offer them to the poor deer. It paused at the edge of the woods and turned to look at me. I spoke to it, wishing it could understand me, knowing it would not. After another few moments of eye contact, the deer disappeared into the trees.

I went back inside feeling sad and helpless. I made a few calls that I’m sure will amount to nothing. Nature is left to take its course.

It was a humbling, sobering experience. It was a reminder of my place, and of my limits.

I keep hoping to see that deer, when I’m walking or driving through my neighborhood. I probably won’t. This is a story that I will never know the ending to. As ever, my imagination stews on the possibilities.