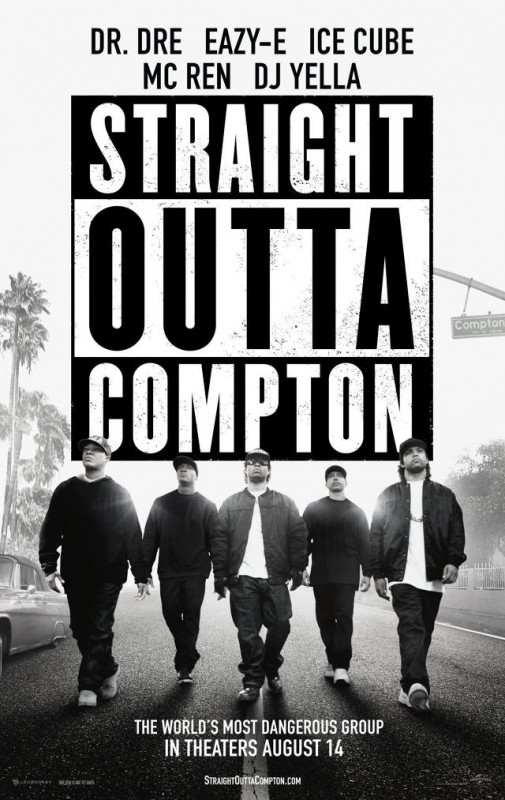 On Saturday night, Andy and I went to see Straight Outta Compton, the biopic about (primarily) Dr. Dre, Ice Cube, and Easy-E, who together founded one of the biggest, most influential, and most iconic rap groups in history. Upon returning home from the theater, I immediately jumped on Twitter to sing the movie’s praises. I had to. The movie energized me in a way that would not be contained. I can’t stop thinking about it.

You guys! #StraightOuttaCompton is amazing.

The movie, not the album. (Although the album too.)

Honestly I think it deserves a Best Picture nomination. Will it get it? Probably not.

#StraightOuttaCompton lacks the “dignity” of #Selma, but both are VERY important movies. They ground history/politics in personal stories.

Do you care about racism? Do you enjoy hip hop? Do you love stories about the struggles & success of artists? Go see #StraightOuttaCompton!

Yes, there is a LOOOOOOOT of swearing, and some sex/drugs/violence. But don’t let the “rough” exterior deter you from an excellent film!

Those are my thoughts in a nutshell, but I wanted to discuss a few things in more detail:

F-bombs and n-words. I suspect that a lot of people will be turned off by the “vulgar” facade of Straight Outta Compton. The movie showcases a side of American culture that many look down on, and it’s easy to use the profanity as an excuse to dismiss the film, the music, and the many artists who created it all.

But as a writer, as a lover of words, I think it’s important to recognize that profanity is just a mode of expression, as valid as any other. So is “street” speak. So is broken or accented English.

Things do not have to be comfortable or pleasant or polished to have merit. Furthermore, who gets to define comfortable and pleasant and polished anyway?

Hip hop as a voice for the marginalized. Eddie Huang, the celebrity chef whose memoir inspired the TV show Fresh Off the Boat, talks openly about his love for rap music. He has said that as a chubby Chinese kid growing up in the suburbs of Orlando, he stuck out in pretty much every way, and he connected to hip hop because it is all about the hardships of being in the minority. It is angry, empowering, unapologetic social commentary set to music that makes you move.

Growing up, I knew a lot of Asian guys who were into rap. Coincidence? Maybe.

Not just for black people. “Conventional wisdom” says that only black people will read/watch/pay attention to black stories — and thus, that black stories are “niche” and can’t be blockbusters. But I have never been convinced of that. I certainly don’t want it to be true.

Personally, I have read and admired books like Their Eyes Were Watching God, The Bondwoman’s Narrative, Beloved, Things Fall Apart, and Pointe. I have been a fan of shows like Sister Sister, Fresh Prince of Bel-Air, Hangin’ With Mr. Cooper, black-ish, and Empire. I have watched and loved movies like Bad Boys, Dream Girls, Precious, Beasts of the Southern Wild, and Beyond the Lights. And I have never once thought, “This story was not meant for me. I cannot relate. These are not my people.” Just the opposite, in fact.

I know I’m not alone in this.

Straight Outta Compton’s screenwriter was a middle-aged gay Jewish man. Clearly he connected with the story of these young, impoverished black musicians, because he did a fantastic job with their story.

Of course, he didn’t do it alone.

Oscar contention. As I said, I think Straight Outta Compton is worthy of a Best Picture nomination. Probably Best Director and Best Actor (for Jason Mitchell, who plays Easy-E) too. Every aspect of the film was top quality, and the subject matter was a perfect balance of personal and political, historical and timely.

Skepticism and hope keep battling inside me. Last year Selma got nominated, yes, but it lost out to a movie that I couldn’t even finish watching. Plus, Ava DuVernay and David Oyelowo were horribly snubbed. A few years earlier, Ray was also nominated and lost, but at least Jamie Foxx won for his amazing performance.

That’s not a lot of precedence to go on, though. And those movies focus on black heroes who are actually accepted and embraced by the mainstream.

Police brutality. OK, this one doesn’t really segue well, but I need to talk about it. Sunday morning, I woke up with swollen eyelids. I had cried that much during Straight Outta Compton.

Throughout the movie, we see Dre, Easy, and Cube experience multiple conflicts with law enforcement. Not once are they treated with respect, or even basic decency. It’s very hard to watch. Even harder when you remember that it’s real.

The film also includes brief but harrowing footage of the Rodney King beating. In 1991, I was only 5 years old, so I don’t remember much of anything about the incident myself. But 25 years later, I’m very aware of the world around me, and it’s disheartening to see the same thing happening now. So much has changed, and yet so much hasn’t.

Treatment of women. Given the role women tend to play in hip hop culture, I had low expectations for what I would see in Straight Outta Compton. But I was pleasantly surprised. It’s a story about the men, yes, but the women who figure prominently are portrayed with a fair amount of respect. The mothers, the wives, even Dre’s baby momma. We see them as strong, savvy individuals, who play significant roles in the lives of these men.

The background women may not get as much respect, but I felt that they weren’t used gratuitously. There were plenty of bare body parts, but without the unnecessary lingering that I see in so many music videos and cable TV shows. It was more like set dressing, for authenticity.

Note: In real life, a few of these guys have reputations when it comes to misogyny, and even violence against women. I am in no way condoning that. But I do understand the decision to leave that out of the movie given that (A) these guys were producers on the film, and (B) it’s not relevant to the arc of their music careers or friendships, which is the heart of this story.

Update: Dre addressed his past mistakes. Ice Cube made new ones.

Last but not least, here’s a link to the original Straight Outta Compton album, free to stream on Spotify. Several of these songs were familiar to me already, but I definitely have a greater appreciation for them now.