Have you done absolutely everything you can to reach your dreams?

A few nights ago, I sat in bed working on my laptop while Andy and Riley slept soundly next to me. That night, “working” meant catching up on a bunch of reading I had been putting off, including this 2-part personal essay by wide receiver Andrew Hawkins. (Formerly with the Cincinnati Bengals, currently with the Cleveland Browns.)

You guys, this essay wrecked me. I sat there in the dark, tears streaming down my face, sympathizing with every struggle, every doubt, every hope in Andrew Hawkins’s words. Because I have felt those exact same things on my writing journey. I still feel them. I’m still striving.

In spite of his talent and his drive, Andrew Hawkins was too short. Too small. He had to find unique opportunities for himself — or make them. He caught a couple good breaks, but a lot of bad ones too. Two steps forward, one step back. For years. But he didn’t quit. He had faith and patience. Perseverance. Passion. Now he’s finally where he wants to be, and it means everything to him.

It means a lot to me too, to read about it, because his story basically asks, Have you done absolutely everything you can to reach your dreams? I want my answer always and forever to be yes.

@Hawk @PlayersTribune I know you’re hearing this a lot, but thank you for writing about your journey. I’m in tears and so inspired. <3

What would you do if someone told you couldn’t have the life you wanted? What lengths would you go to to prove people wrong and live your dream?

Part 2: “Whatever It Takes”

It was creeping up on the fall of 2011, almost four years since I stood on that scale at 161 pounds and told myself I could make a run at the NFL, and I was back to square one without an NFL contract. I didn’t even last one day in the league. And during my pursuit of that dream, life started happening around me. My girlfriend was pregnant. Now, with a baby boy on the way, it wasn’t just about me.

I still cry before every game. I wish I could put those feelings into words, but I can’t. As the tears run down my face, I think of everywhere I’ve been, everything I’ve overcome and everything God has brought me through. Now, I’m able to provide for my son in a way I never thought I could. Despite seemingly insurmountable obstacles, despite the impossible odds, I achieved my dream.

As an experiment, I’m doing away with the bullet points, even though they’re like a security blanket for me. “Oh, this is just a list, not a real blog post.” But what does that even mean, lol? What’s a fake blog post? And why do I have to take everything so seriously? Like Jane the Virgin, Transparent jumped to the forefront of my attention after its Golden Globes wins. I binge-watched all ten episodes on Sat, Jan 24, thanks to Amazon making them free to stream for that day. (Normally the series is only available to Amazon Prime members.) And just so you know that I’m not a total slug: I was cleaning while I watched.

Transparent felt like an HBO show to me — a bit like Girls, actually — in the sense that it’s well-written, well-acted, and well-produced, but not something that would probably appeal to the mainstream. Not because the topic is niche (though I suppose some would argue that it is…) but rather because the tone of the show just isn’t easy to swallow. It’s a dark comedy (meaning there’s humor, but not the kind that makes you laugh out loud) starring a fairly “unlikable” family. They’re all messed up and abrasive, and they make a lot of bad decisions.

That said, you do sympathize with them, because they love each other, and they’re doing the best they can. The acting is excellent, and there’s interesting storytelling at work too. Flashbacks that parallel the present storyline, or enhance it with revelations. Unreliable narration, or arguably magical realism, depending on your interpretation. Also, the sets are kind of old-timey and gorgeous.

For the most part I do enjoy the show, but I wish there were at least a couple well-adjusted characters. Partly because it would just be a nice contrast, but mostly because I worry about the (false) implication that a trans person can’t have a “normal” family. That by being trans — even (or especially) when she was closeted — Maura irrevocably damaged the people who she loves. I know that isn’t what Transparent is trying to say, but I fear that (so far) the show is sort of saying it anyway.

On the same day that I was streaming Transparent, an old friend came into town, so I took a break and we went to see the Frank Lloyd Wright-inspired garden show at Krohn Conservatory. It was small, but smelled amazing. Wasn’t too bad to look at, either.

Note to self: Get a plant. Something green and alive to freshen up your home. Believe it or not, I’ve never seen Dead Poets Society, but I know the gist of it, and I’m pretty sure Mona Lisa Smile is the female version. Forward-thinking teacher inspires brilliant but hesitant young minds? Check!

Personally, I very much enjoyed the movie and its overtly feminist messaging. I also liked the entire cast, including the somewhat divisive Julia Roberts. (You either think she’s gorgeous or has a toothy horse face. I am in the former group.)

There aren’t any surprises in this movie, but that’s okay. It’s about character. My favorite moment, hands down, is when a heartbroken Betty (Kirsten Dunst) viciously lashes out at Giselle (Maggie Gyllenhaal) for being a slut with daddy issues, and Giselle just gathers her screaming, crying friend into her arms, and they hold each other.

Usually Andy and I just play flag football from Sep to Nov, but this year the team wanted to try a few other sports in addition. Right now it’s broomball, which is like hockey without skates. And “brooms” instead of sticks. And a ball instead of a puck. 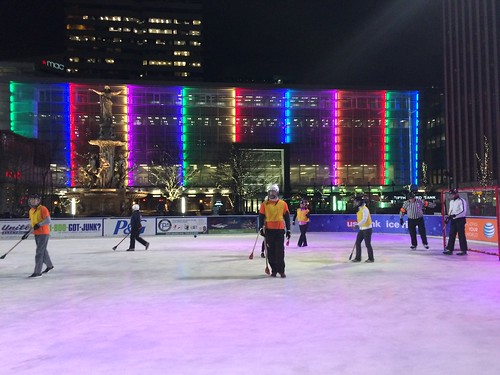 Speaking of sports… Since my latest Writer Unboxed post fell on Super Bowl Sunday, I decided to spotlight 3 football players and share what I’ve learned from them about pursuing dreams.

“Talent, Perseverance, and Hard Work: Lessons on Writing from Football”

Fred Jackson may never end up in the Hall of Fame, but he’s got heart and soul, and he’s the reason I fell in love with football again. Although the odds of him making it to the NFL seemed grim, he had faith in himself, and passion for the sport. He is living his dream because he looks at every step of the process as an opportunity to improve and impress.

That’s the kind of writer I want to be. 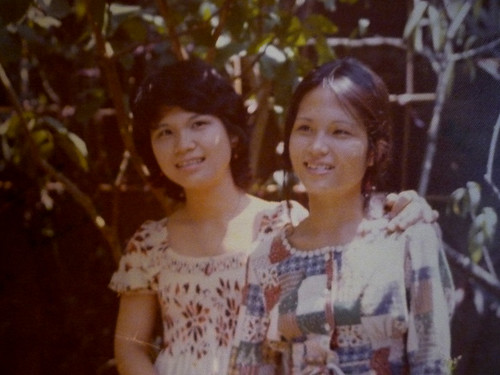 My mother (right) and her sister, in Taiwan.

I’ve written about my mother many times. Today I’m going to borrow other people’s words.

I am successful because my mother showed me how it is done. She invested herself in me, and I owe her everything. I hope that she knows that I knew what she was doing. I knew that she cared and wanted me to learn how to work, how to be generous, how to be loyal. She is the reason I know how and where inside myself to dig deep. I was paying attention. I recognize the tireless campaigner she was on my behalf.

From Kevin Durant’s MVP speech (which you really should watch, with tissues handy):

Michelle Kwan and the importance of mirrors Moms are the best (Or: A brief scene from Friday Night Lights that brought me to tears)

First, a very relevant shout-out to my mother: Happy birthday, Mom! Thanks for always supporting me in the pursuit of my dreams. After a series of controversies, Dillon Panthers star running back Smash Williams finds himself without a scholarship. Which means he can’t afford to go to college. Coach Taylor lines up one last opportunity, but Smash isn’t sure he’s going to take it.

One of my favorite parts of the day is #myRB2 fall

Found a little rainbow while strolling through the