Originally I had a deep, philosophical entry planned for today, but things change. Kind of like how I went to bed early with the intention of getting eight good hours of sleep, but then Riley decided to go on a barking spree at 3 in the morning. Thanks, pup.

Today my plans — ALL OF THEM — were derailed by what I termed a “mini blizzard.” Hamilton County later termed it a “Level 3 Snow Emergency,” meaning that no cars should be out on the road, but of course that was TWO HOURS after I drove to work.

It took me 30 minutes to chip through the 1″ thick layer of ice around my car this morning. Another 10 minutes to get up the long upward sloping driveway that leads out of our complex. I got stuck behind a salt truck, who got stuck near the top of the hill, so I stayed near the middle while another car waited at the bottom. The salt truck waved me on. I attempted to drive. No go. I waved the other car on. They got all the way up to the salt truck, then had to reverse all the way back down. Everyone sort of looked at each other like, What now? So I reversed down the hill and worked up some momentum to reach the top. As I was ascending, the salt truck was coming back down and a man on the back yelled to me with some attitude: “USE YOUR FOUR WHEEL DRIVE!”

Hey, why didn’t I think of that?

Oh yeah. BECAUSE I DON’T HAVE FOUR WHEEL DRIVE, F#CKER!

Geez. I may be from Texas, but I do have a brain. Give me some credit.

I had already called both my bosses by this point, but neither picked up, so I decided I better go to work just in case. Well, I was about five minutes away from the office when one of my bosses called and told me to stay home. Uh, thanks.

Margot and Kate were already at work, and my other boss came in shortly after. The four of us hung around for a bit, then received word about the Level 3 declaration. Boss #2 let us go home, but Kate had to wait for her husband (they carpool) so Margot and I stayed with her. We baked cinnamon rolls, and that pretty much made up for coming in unnecessarily.

Driving home was slightly better, although still not great. My car got stuck while trying to park, but I was too tired to dig myself a path. Sticking out and crooked will have to do. 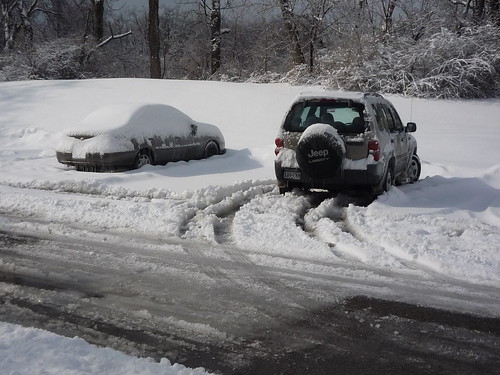 So now I’m safe and warm at home, eating soup and wearing my Powerpuff Girls toe socks. I sound bitter and grumpy, but I’m not. (Or at least, not a lot.) I did drop the f-bomb more times today than I have in like six weeks combined, but that was mostly for dramatic effect. Truth is, I’m rather proud of myself. Like the title says, for a Texan, I kicked ass today.