So, here’s what I thought was going to happen this weekend:

And here’s what actually happened: 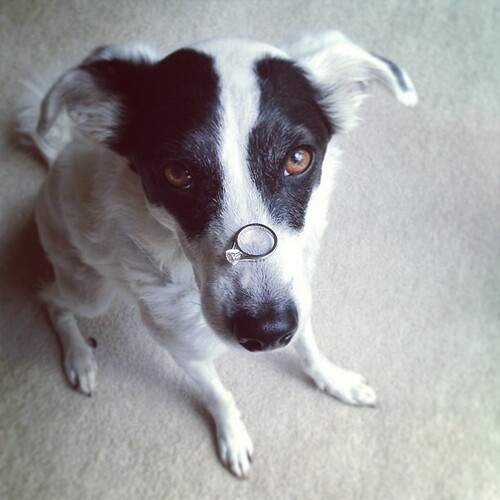 Yes, Andy and I got engaged.

(No, that’s not how he proposed. I just thought Riley was cuter than my hand.)

More details, for those of you who are curious:

Andy has, unbeknownst to me, been dreaming up proposal ideas since 2008. They have ranged from the extremely private (just us) to the extremely public (Keith Urban concert) but always involved a level of sneakery, since he knew I wanted to be surprised.

7 months ago, Andy finally settled on The Idea.

Because writing and storytelling are so important to me, he decided he wanted to incorporate them into the proposal. So first, he made a book. A children’s book, sort of. It’s called THE STORY SO FAR, and it’s about us. How we met, fell in love, started a life together, etc. Told in alternate rhyming stanzas. Illustrated with pictures of us from over the years.

In a bold move, this book was hiding somewhere in our house until last week.

Two weeks ago, Sarah emailed to say she had volunteered us (We Heart YA) to read to underprivileged children as part of an all-day event at Joseph-Beth. She asked if I would meet her at 7:30 AM, before the bookstore opened. After moaning and groaning about the early start time, I agreed.

A couple days later, I was telling Andy about it, and he said it sounded like a cool way to give back to the community and asked if he could tag along. Since waking up early on a weekend seemed less painful if we were doing it together, I said sure.

The day of the event was Saturday, May 4, 2013. Our alarm went off at 6:30 AM. I snoozed it a couple times, then finally dragged myself out of bed to take Riley out and feed him before we left.

On the drive over, Andy was in good spirits, teasing me about being tired. He said that maybe this would be life-changing. I just rolled my eyes, since he says that all the time, about silly things like going to dinner at Ruby Tuesday or meeting up with friends for putt putt.

When we arrived at Joseph-Beth, Sarah was already there, and Stephanie was just pulling in. The four of us got out of our cars and were greeted at the door by Dave, whom I recognized from various author events at the store. He took us over to the children’s section where we would be reading to the kids. There was a theater-like area, and a chair with a short stack of books on it. I told Dave I had never done this before and asked how it would go. He gave me a funny look.

Dave: “You’ve… never been to Storytime?”
Me: “Nope.”
Dave: “Uh, well, the kids will come in and sit there, and then you’ll sit here and read to them.”

(At the time I was thinking, “Well, duh.” But in retrospect, I suspect that my question caught him off-guard because it seemed like maybe I was catching onto things!)

Anyway, Dave wandered off, and since we were four smart adults, I figured we could handle Storytime ourselves. Andy suggested we take a look at the books on the chair. First was EXTRA YARN by Mac Barnett and Jon Klassen. Second was CHLOE AND THE LION by by Mac Barnett and Adam Rex. Last was THE STORY SO FAR by…

My immediate thought was that this was a very strange coincidence. Then I wondered if Dave knew Andy somehow and was playing a practical joke. Finally I began to realize what was happening.

Only a second or two passed before Andy turned to me and said, “We’re not here to read to children.”

My head whipped around to find Sarah. “WHAAAT?”

(I assure you, it was a GIF-worthy moment.)

Andy suggested that I have a seat, and he would read to me. As I sat down, I began to realize just how fully I had been duped. This was a proposal. There were no children. There were never any children.

Andy’s hands were ever-so-slightly shaky as he opened the book to the first page, and in that moment, I very nearly cried. But then the shock took over again, and all I could do was sit calmly, smiling and trying to process everything while he read me his sweet rhyming words about our lives, our love.

His hands stilled and his voice gained strength with every page. When the story was nearing a close, he handed me the book and said that I should turn to the end. I did, and when I looked up, he was down on one knee, with a ring. He spoke the words that were written on the last page.

Will you marry me?

Breathless, I managed to say, “Yeah. Of course I will.” Not the most romantic or enthusiastic-sounding answer, but I assure you, I was over the moon. I put on the ring, and we kissed and hugged.

“You should thank Sarah and Stephanie for this,” he said as we stood up together. 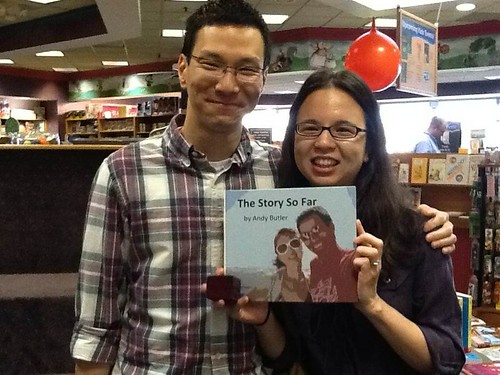 But of course I didn’t. I thanked them, and Dave, and then spent the rest of the weekend wrapping my mind around what had happened. Around all the careful planning that Andy had put into it. You guys, there are so many little things I’ve left out, seeds that Andy planted over the course of several weeks so that they would bloom naturally and I would not suspect a thing. The man is a diabolical genius and we are all just lucky that he uses his powers for good!

Andy had given certain people advance notice of the proposal, so many of my calls to friends and family were more or less like, “Hey, I’m engaged! But you already know that…” Still, it was nice to share the news and the story.

Later that night we updated our relationship status on Facebook — which was bittersweet, since I took a strange sort of pride in not ever having had a relationship status on Facebook before — but the outpouring of love and excitement from everyone made it totally worthwhile. (Also, let’s be honest: Social media is just such a good, convenient method of letting people know what’s going on.)

Last but not least, on Sunday, Andy gave me one additional gift: A scrapbook he had made of the top proposal ideas that didn’t pan out or that he had decided against, for whatever reasons. Going through that was like getting proposed to a dozen more times.

Now we’re just going to enjoy this phase for a while. After all, we dated for almost 8 years, so why rush to plan a wedding? (We do agree that we’d prefer something very small and low-key, though.) So technically, not much has changed.

And yet, calling him “fiancé” gives me a little thrill every time.