It’s kind of funny: When I started this blog, I was determined to post every day. (Some days I even posted more than once!) As the years went on, I ran out of energy for that, and now I’m happy to blog only when I have something to say. But I’ve gotten so used to that being just once a week or so, that when there are more thoughts or stories or quotes bursting to get out, I feel weird. Like I have to wait. Like I need to space them apart.

But I don’t believe in saving good stuff for later, and I now have over a dozen drafts waiting to be finished and posted. When it rains, it pours.

Are you ready for a flood? 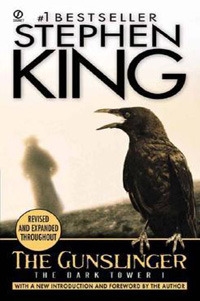 After years of talking about it, I finally started reading Stephen King’s epic fantasy series The Dark Tower. It’s one of Andy’s favorites. So far I’ve only finished the first book, THE GUNSLINGER, which was certainly an interesting and compelling read. Andy joked that he didn’t understand most of it because he was only 12 at the time that he read it. Well, I’m nearly 30 and I still didn’t understand it all.

Unrelated, here’s one of my favorite parts, from the introduction:

And from later in the story itself:

“Only equals speak the truth… Friends and lovers lie endlessly, caught in the web of regard.”